Ever dreamed of traversing the galaxy like a Jedi? Or visiting the staggering Royal Palace of Naboo? Well, with a little imagination, it turns out you can, by checking out these real-life Star Wars filming locations...

Remember those dome-shaped buildings in Mos Espa, the home of Anakin Skywalker? Well, they weren’t just made up for the movies. This style of rock-cut architecture is common in Northern Africa and can be seen in countries like Morocco and Tunisia. In fact, Tunisia was a filming location for many of the town scenes, and some of the sets are still standing today.

If visiting Tunisia, head to Ksar Hadada (in Ghoumrassen), an old-fortified village, where George Lucas filmed the slave quarters of Mos Espa in Star Wars: The Phantom Menace. Parts of this village have now been turned into a hotel to accommodate eager fans, and the familiar domed roofs and wide desert landscapes are guaranteed to have you feeling like you’re on Tatooine.

According to the production team, filming in Tunisia was a nightmare, since their shooting days were majorly disrupted by the largest rainfall locals had experienced for seven years. However, by trekking out to a rock-cut hotel in Matmata, the team were able to get the shots they needed. Today, this place still exists and now markets itself as a Star Wars-themed hotel.

Fun fact: did you know the planet’s name “Tatooine” didn’t exist in the original screenplay? It was only when George Lucas visited the Tunisian town of Tataouine, that he was inspired to come up with the name.

Following the locations from The Phantom Menace again, eager-eyed fans may notice that the Royal Palace in Theed, Naboo, was in fact based on, and shot in, the Palace of Caserta in Italy. The marbled floors, sweeping staircases and ornate columns were perfect for representing the Imperial grandeur of Naboo. Though the palace was heavily damaged in the movie during several battle scenes, the real-life Palace of Caserta was unharmed, since these stunts took place on exact replica sets in England.

Anakin and Padmé’s wedding was also shot in Italy, within the beautiful Villa del Balbianello, overlooking Lake Como. This iconic villa has been a base for countless writers, weddings, and movies, including Casino Royale. However, it’s most famous movie must be Star Wars: Episode II Attack of the Clones, where Anakin and Padmé have their secret ceremony in the company of C3PO and R2D2.

Star Wars Locations in the UK

Every day, thousands of commuters pass through Canary Wharf tube station to get to their jobs in the city, but did you know that this underground tube stop was once a filming location for Star Wars? That’s right, the metallic corridors and space-like interiors were used as the Imperial Base on Scarif in Star Wars: Rogue One. Designed by Norman Foster, this tube stop was the perfect base for the galaxies’ villainous hideout.

Another recent movie, the Force Awakens, saw our heroes arrive on the lush planet of Takodana, located in the Mid Rim. Known for being a beautiful place of green woodland, steep valleys and freshwater lakes, it made sense that the location for this planet would be the rolling hills of England. Mostly shot in Cumbria, fans can visit Derwentwater and Thirlmere to glimpse the setting of Maz Kanata’s Castle and the views from several flight sequences. For the denser, forestry scenes, these were shot in Puzzlewood in the Forest of Dean. This forest has been the location for countless movies, including Harry Potter and the Deathly Hallows Part 1, and was the inspiration for Hogwarts’s “Forbidden Forest”.

Star Wars Locations in the USA

The US is home to many diverse landscapes, so it is no surprise that it’s been the filming location for several different planets, with entirely different morphologies and climates across the Star Wars universe. On one end of the scale, we have the sandy Buttercup Valley in the Yuma Desert of Arizona, serving as the perfect desert base for the Great Pit of Carkoon, which you’ll remember as the giant pit that housed the giant carnivorous sarlacc in Return of the Jedi.

On the other end, you have the lush forestry of Del Norte County in California, which served as the location for the forest scenes on the moon of Endor, again in Return of the Jedi. This forested moon is the site of a major battle, as well as the site of Darth Vader’s funeral. Elsewhere in California, in Death Valley, the road to Jabba’s Palace on Tatooine was shot in Twenty-Mule Team Canyon.

For more Hollywood inspired travel – check out our other posts, such as a California for La La Land fans, Andalusia for Game of Thrones fans and the filming locations from Bond's No Time to Die. 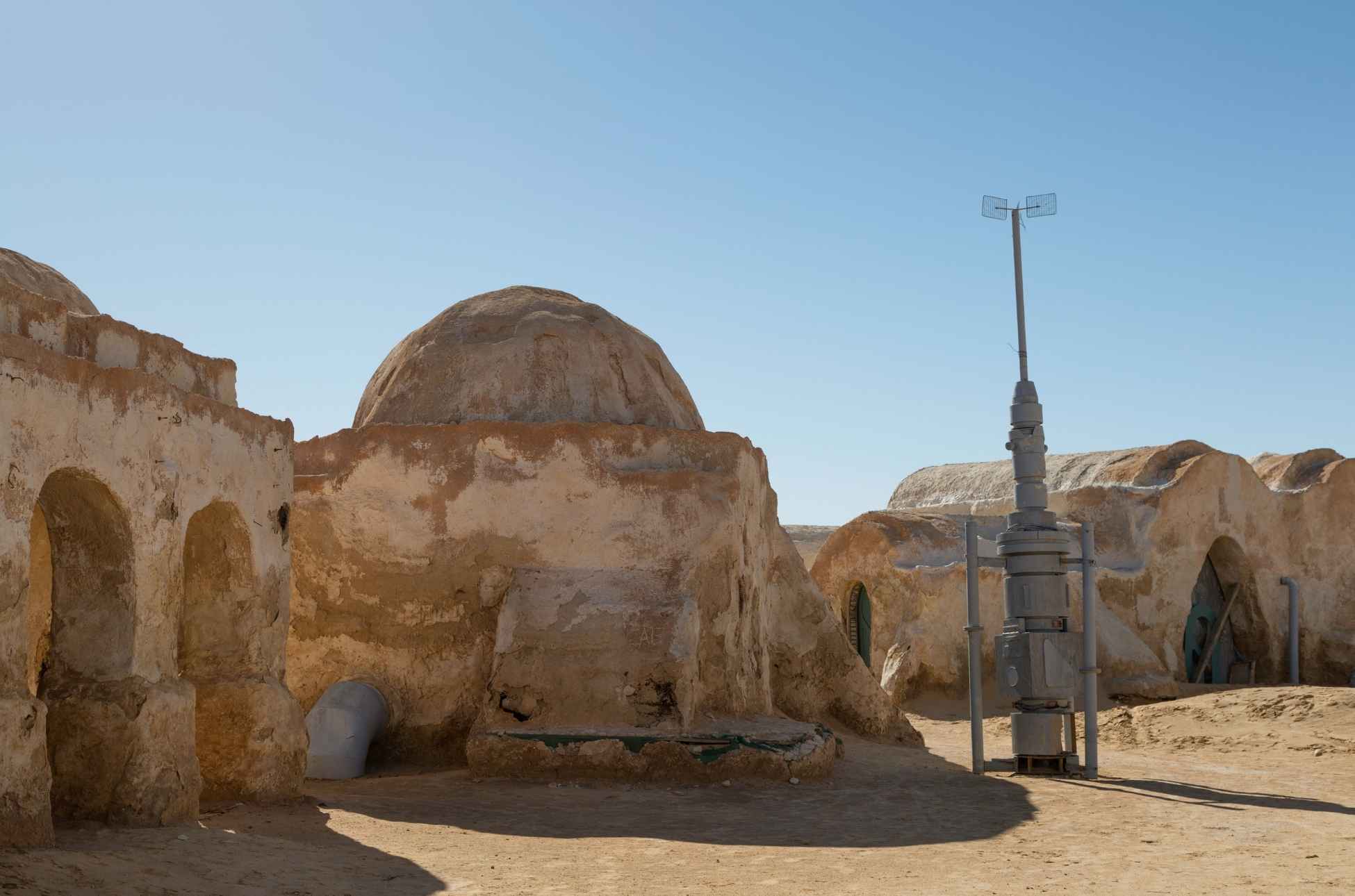 Filming Locations – at a Glance