Andalusia for Game of Thrones Fans: A Song of Southern Spain

For a short city break in the sun, Andalusia (the southern region of Spain) should be the top of any list. With a warm climate even in the depths of winter, you can expect long days strolling amongst palm trees and open plazas, sampling sherry and tapas in the cool shade of a café and ducking into tiny flamenco bars as the heat of the day is replaced by the social buzz of the evening. If there is one place where George R.R. Martin must have dreamt up the exotic regions of Essos and southern Westeros, it is here.

The beauty of Game of Thrones is not just the storylines or the scheming characters, but the fantastical worlds it dreams up. No surprise then, that filming locations like Dubrovnik have exploded with popularity in recent years, as holidaymakers are eager to experience the red roofs and cool marbled streets for themselves. For many, the realisation that many of the dreamy towns and castles seen on screen were in fact the product of sets and sound studios was a huge disappointment. Despite this however, a lot was in fact inspired by real-life places, and there are plenty of trips across Europe and North Africa that can bring that fantasy feel of jumping into Westeros - southern Spain being a prime example.

Seville is the beating heart of Andalusia, and the perfect place to fly into. With its narrow, winding alleys and stunning architecture, Seville is worth the trip all in itself. Best known attractions in this city are the spectacular Alcazar Palace and Cathedral of Seville, yet simply getting lost around town is the best way to soak up that distinctive Andalusian feeling. Stay somewhere central, perhaps an apartment overlooking one of the towns numerous buzzing plazas, and don’t worry about cooking – the endless cosy bakeries and tapas bars will have you covered.

With its unique blend of Spanish and North African influences, the geometric style of architecture around town bears more than just a passing resemblance to styles seen in areas like Kings Landing, Dorne and Essos, but nowhere is this more distinct than in the Real Alcazar de Sevilla. Located right in the centre of town and next to the equally staggering Seville Cathedral, everything about this palace looks straight out Dorne, and for good reason. In fact, the palace and gardens of the Alcazar are recognisable as the actual film site of the Dornish Gardens in the later seasons of the show (think of Myrcella Lannister and Trystane walking arm in arm through the Water Gardens of House Martell). Full of wrought iron doorways and low hanging orange trees, these gardens are perfect for strolling through and perhaps plotting royal treason. Entry to the palace costs €11.50 for adults and only €3 for students. Though it is possible to buy tickets on the door, it is highly advisable you book in advance, as queues can get very long under the hot sun.

Andalusia is famous for its bullfighting, and one of the most famous bullrings in the world is the Osuna Bullring in Osuna. With its distinctive orange dirt and 5,000 capacity seating, it is certainly an awe-inspiring arena. For Game of Thrones fans, this is another major pilgrimage site, it being the location for the fighting pit in Meereen. From Jorah’s return to fight for Daenerys’s forgiveness, to the attack by the sons of the Harpy and finally the iconic escape by Daenerys on her dragon, this pit is the site of some of Game of Thrones’s most iconic moments. Beyond Game of Thrones, some of the real-life bullfights in this ring could give the series a run for its money in terms of thrill and danger. Find out more by visiting on a Thursday, Saturday or Sunday. Entry fee €2.

Just a couple hours from Seville is the beautiful city of Cordoba. Known for its complex history, the influences of Roman, Christian, Moorish and Muslim styles can all be seen in the varied architecture that make this town so distinct. Most famous is the Mezquita-Catedral (Mosque-Cathedral) of Cordoba, a spectacular example of Moorish Architecture. With its mirror-like hall of repeating red-striped archways, no building in the world looks quite like it. Prices are €11 for adults and €9 for students. You can also organise a night visit, for an atmospheric journey through the candle-lit hall. If you are even willing to get up early, entrance is free every day except Sundays between 8.30 and 9.30am.

Just beyond the Mezquita is the Roman Bridge, a large bridge from 1 BCE crossing the Guadalquivir river. Worth a stroll down to glimpse the nice views across the river, as well as the back entrance of the cathedral, eagle eyed viewers may also recognise this bridge from GoT. Digitally enhanced for the show, this structure forms the Long Bridge of Volantis, a crossing used by Tyrion Lannister and Varys as they make their way from Pentos to Meereen. Cleverly CGI’d by the FX team, the bridge is edited to appear laden with Spirited Away-style wooden housing, complete with bustling lantern-lit restaurants, bars and, of course, brothels.

No trip to Andalusia can be complete without visiting the remote hillside town of Granada. Though geographically isolated, this town is rich with beautiful European-style architecture, luxury shopping and delicious eateries. The jewel of Granada, however, is the famous Alhambra, a towering fortress overseeing the town. Originally built on the ruins of Roman fortifications, the building was renovated into a dazzling palace by the Nasrid emir Mohammed ben Al-Ahmer.

This fortress marks the final point of Islamic presence inAndalusia (known as Al-Andalus during Almoravid and Almohad rule). Forming an Emirate of Granada, Islamic influence persisted in this remote spot of Spain right up until the late 15th century, before finally falling to the Catholic Monarchs. The Alhambra therefore marks a fascinating melting pot of Christian and Islamic influences, with its geometric tiling and beautiful marbelled courtyards. Large ponds line the middle of these courtyards, creating a beautiful perfectly symmetrical reflection of the archways above. Despite Seville being the filming location of Dorne, it is the Alhambra that perhaps better fits the descriptions of Dorne’s orange-groves and palm-treed villas. Very much a palace fit for kings, the steep ascent up to the Alhambra could just as well be the ascent to Sunspear, and the beautiful fountained grounds the Water Gardens of Dorne. Having fought off conquests for centuries, and seen its fair share of battles, you may find the guided tour of the Alhambra eclipses the excitement of even the books! Entrance to the Alhambra costs €14.85 for adults and €9.45 for students. 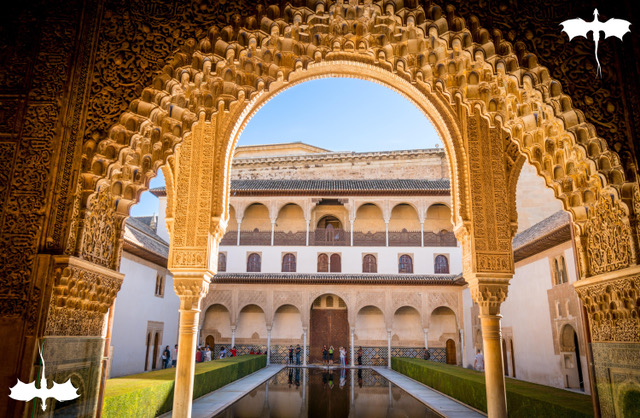 Spain - Facts before you go