Nothing evokes imagery of a time when the world we know today was non-existent quite like the mighty volcano. These impressive mounds of land and magma cleave explode out of the land like a vent for the frustrations of the earth itself, with eruptions spewing forth caustic smoke and bubbling lava that humanity still to this day struggles to contain. While the Jurassic period may be over (unless you're a film lover), these monuments to a time when the land was wild and untamed make for magnificent destinations for anyone looking to walk the line between frightening and fascinating.

Volcano hikes run the gambit from casual walks up these awe-inspiring peaks that have laid dormant for years to constantly erupting thrill rides that require special gear and a high level of fitness and bravery to overcome. When you’re enticed by the danger or drawn in by the natural beauty, there are a variety of volcano treks across the world that give you plenty to choose from, as long as you inform yourself on the recent status of the hot spot you’ve got your heart set on.

Standing tall at almost 11,000-feet is Europe’s largest active volcano, Mount Etna. Located on the gorgeous Italian island, Sicily, this impressive precipice commands beautiful vistas wreathed in mis and vapour from the various scalding crevices that can be found along the surface. As fearsome as this mass of magma may seem, the Sicilian locals can be found all around the base providing constant monitoring of volcanic activity and easy access up the mountain for anyone looking to make the journey. It is also believed that the magma flows cause the surrounding soil to be especially fertile, which should be extra enticing for anyone looking to sample some delicious Italian cuisine with the highest quality grown ingredients.

While the summit may be off-limits depending on the level of volcanic activity during your visit, you can get very close regardless. A series of cable cars and buses operate in the area nearly all year round which are easy to navigate almost straight to the top with. Alternatively, the adventurous can attempt to make their way to the top on foot for a more up close and personal look at this natural marvel. To visit, simply take a bus from the railway station in Catania to Rifugio Sapienza and start your trial by either wheel or foot.

Mount Aso sits at the centre of Japan’s third largest island, Kyushu, and makes for a stark contrast from the verdant green hills and beautiful beaches that the area is otherwise known for with the volcano itself having transformed the surrounding land into a barren landscape filled with smouldering craters and vast, almost desert-like plains. It boasts a caldera, the term describing the cauldron-like hollow that appears after an eruption that empties a volcano’s magma chamber, with a 16-mile diameter, making it the largest in the world. This combined with the constant stream of dangerous gases and surrounding landscape make a visit here truly feel like you’ve made your way to another planet.

There are multiple peaks spanning Mount Aso but only one of them, Mount Nakadake, is open to visitors. The areas’ sulphur dioxide levels are under constant surveillance and are portrayed to visitors via a light warning system. While this is helpful for informing travellers with conditions that are of concern, what truly makes traversing this eerie bastion a risk is the impending threat of eruptions, with instances occurring as recently as 2021 and 2016. As sublime as the whole areas’ appearance is, make no mistake, the otherworldly feeling that envelops this site is to be respected, as it is not kind to most people and certainly not for the faint of heart

For those willing to brave the billowing clouds of dangerous gas rolling forth from this menacing maw of the earth, bus rides can be taken from JR Aso Station to Asosan Nishi Station, where an additional shuttle bus will bring you to the crater itself. It’s almost worth it to witness the shift in landscape alone, but for those looking to explore further make sure you come prepared.

The coastal capital city of Iceland, Reykjavík, is iconic for many reasons. Housing a vast array of historical Viking artefacts, the geothermal wonder of the world known as Iceland’s Blue Lagoon, and tours taking star struck visitors out to witness the iconic northern lights. There will be people who, upon hearing this name, will be thrown back to 2010, where a volcano situated near the city became infamous for disturbing air travel in the area by shooting forth a hugely disruptive ash cloud into the sky, halting flights for around a week. This cloud, as if a beacon to adventurers and hikers, stated a huge uptake in interest for Eyjafjallajökull, although many of those whose hearts were captured by this cloud had a lot cut out for them.

The biggest hurdle when tackling Eyjafjallajökull is the local climate. While almost any other volcano trek is associated with desolate, dusty lands and dry, scalding air, this Iceland volcano is completely wreathed in snow and ice. The path to the peak starts at sea level and will have adventurers hiking through craggily glaciers and frosty tundra in order to reach the 5,500-foot summit. While arduous, this journey will treat its denizens to incredible scenery of snow and ice fields juxtaposed with rolling ash clouds as well as breath-taking views of surrounding islands and glamorous glaciers. Upon reaching the top, you will be treated to a hard-earned peak at the crater caused by previous eruptions that have now come to make this frosty frontier so legendary.

It goes without saying that this particular hike is quite dangerous and requires the use of additional, glacier-appropriate, gear such as crampons. It’s also one that you shouldn’t be attempting alone if you’re not a seasoned mountaineer, luckily there are plenty of tour guides that can be found across Reykjavík to guide you through this tricky trip. If this expansive Icelandic scenery has your interest but you’re slightly scared off by the prospect of a treacherous icy trek, then you can wait until the summer and go for the Fimmvörðuháls highland hiking trail that will take you between the Eyjafjallajökull and Mýrdalsjökull glaciers. Along this 15-mile stint you’ll be treated to steaming craters, green valleys, lava-kissed hillsides, and pure drinkable mountain water. The incredible experiences and storybook-like scenery makes this one an incredibly easy recommendation.

Starting from Skratch? Here’s some tips to help you get started: 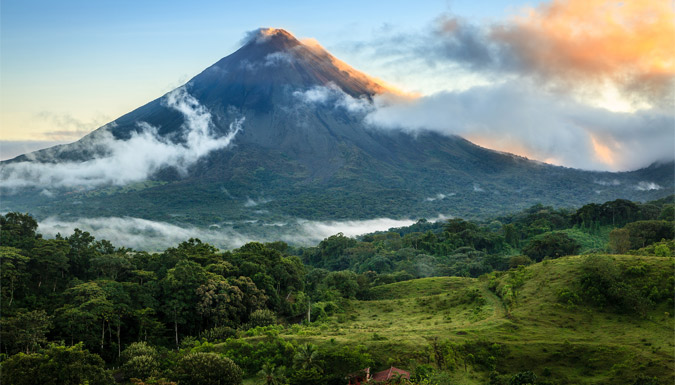 Volcanoes - Facts before you go

🌋 Volcanoes have created more than 80& of the Earth's surface

🌫 Around 1,500 volcanoes are active today

🧲️ It's a horseshoe-shaped zone stretching from South America, through Japan, and to New Zealand