Trans-Siberian Railway – The Longest Railway Line in the World

The Trans-Siberian Railway, connecting Moscow to Vladivostok and Beijing, is one of the best journeys on earth. Each stop on this iconic 9000km journey constitutes a new adventure, whether it be exploring remote hillside Siberian villages, a stroll onto the world’s deepest lake, sheepherding with Mongolian nomads or glimpsing wild horses galloping across the vast steppe. Few adventures offer the traveller such a powerful sense of our interconnectedness on this planet and the dizzying number of lives and stories contained within our maps. In this article, we take a look at some of the stops on this weeklong journey, bringing the adventures to our imaginations, and hopefully inspiring incredible travel.

Though any number of variations to this journey are possible, the most famous is to go from Moscow to Beijing. This journey takes the traveller across the centre of Russia, deep into Siberia before ducking down through Ulaanbaatar in Mongolia and eventually to Beijing. All in one go, this journey would take a week, but far more interesting is to “hop on and off,” taking in some of the best destinations along the line.

In light of the #Russia episode being filmed this week, here's a map of the Trans-Siberian railway, longest in the world that goes across the entire country Moscow to Vladivostok. Over 5700mi (9200 Km) with transfers to #Mongolia and #China. pic.twitter.com/TEuYq76Od7

The best time of day to get the train at each stop is generally evening, to cover as much ground at night as possible. The train consists of three classes of carriages: First Class (a private double berth), Second (a compartment with four berths) and Third (open “dorm-like” carriage of berths). First Class is pretty much 100% tourists, Second is around 1/3 and Third is very mixed, but tourists are certainly welcome. All three are a viable option for travellers, with First offering a luxurious journey in privacy, Second a good medium and Third an excellent budget option, especially for those looking to socialise.

There is also a restaurant car that gets changed between each country, a space-age style“diner” in the Russian car, wooden hunting-lodge style Mongolian car and simplistic carriage in China. Standard trains have a single toilet in each carriage (no shower) and plug sockets scattered throughout the carriage hall (no Wi-Fi). The days can be long, but people aboard the train are generally friendly and keen to socialise, whether it be to play cards over vodka in the restaurant car, swap stories in Third or simply gaze and take pictures out at the endless stream of landscapes and trees shooting past the window.

What better way to prepare for what can, at times, be a dirty, cramped journey than starting in one of the most luxurious cities in the world? Known for its spectacular hotels, designer shopping and glamour (what other city has chandeliers in its metro stations?), Moscow is a city that needs to be seen in style. A weekend is enough to see the highlights, including, of course, the iconic Red Square, Kremlin and St Basil’s (the building that looks like a cake). Not to be overlooked is a chance to see Lenin’s corpse - the first of two embalmed world leaders to be seen on this journey. Other highlights include the Space Museum, a short metro ride away and a spectacular monument celebrating Russia’s space programme. For an alternative to the cities countless department stores, the Izmailovsky Market is certainly worth a visit, located in the shell of an abandoned theme park. Even the supermarkets are a sight to be seen, especially the famous Gastronomia Eliseevsky, where grocery shopping never looked more luxurious. Moscow is also famous for its speakeasies, hidden bars leftover from the era of Soviet prohibition, where local knowledge may be needed to hunt down the right unmarked door for a late-night cocktail.

This city is 35 hours from Moscow, and if that sounds like too long to spend on the train in one go, Nizhni Novgorod, Kirov and Perm are other stops in between. However, Yekaterinburg is certainly the most interesting and therefore worth holding out for. As the fourth largest city in the country and just crossing the line into Asia, the city perfectly represents the boundlessness of such a vast country like Russia. Worth exploring are the many libraries and museums dotted around town and the fascinating combination of traditional and contemporary architecture.

History lovers can make the pilgrimage to Ganina Yama, the resting place of the Romanov family as well as the church on the Blood; built on the site of Nicholas II’s execution. If you’re in the mood to buy some cheap high-quality leather goods, then make sure to pay a visit to markets such as Vaynera Street or the famous ‘Chinese Market,’ where hundreds of stalls offer avast array of items to browse through.

If you only stop once in Russia, this is the place to do it. Irkutsk is a beautiful town situated at the base of Lake Baikal; a lake so large it could be mistaken for an ocean. The history of Irkutsk is fascinating and can be explored in the various museums and galleries dotted around town, particularly the ethnology museum which presents a history of the railway. An example of Siberia’s unique architecture, many of the houses are made of wood and give it a romantic ‘toy-town’ feel.

By the lake, a local fish market sells freshly grilled fish, fresh bread and big bottles of beer to have a picnic lunch and, if you feel particularly brave, face a Russian massage in a lakeside sauna (essentially being walloped by sticks) before jumping into the lake to cool off. In winter (though only the brave face the journey at this time), the lake completely freezes over and can be walked across.

Just seven hours down the line is the next stop of Ulan-Ude. This town, rising to prominence thanks to its position at the fork for the Trans-Mongolian route, represents a fascinating melting pot where Siberia meets Mongolia. Key highlights here are the monument to Lenin in the centre of town and the Ethnographic Museum of the People of Transbaikalia Culture Gau, a vast open-air museum dedicated to sharing the stories of the peoples of the region.

Visitors can learn about the religious traditions of shamanism amongst the Buryat local population as well as the influence of Buddhism on the cultural and architectural history of the town. The Voice of Nomads international music and culture festival also takes place here annually.

After nearly a week storming across Siberia, the train finally bends South and crosses the border into Mongolia. Few places on earth offer views such as this, where untouched landscapes of open grassland stretch in all directions to the horizon. Mongolia remains one of the least densely populated nations on the planet and no wonder, the occasional round white tent in the distance marking the only hint of human presence on these sweeping grassy slopes. Wild horses can be witnessed galloping across fields, often closely followed by a nomadic herder. Small villages of semi-nomadic communities dot the hillside as the train hurtles past, picket fences and cattle marking the only indication of permanent residence around the cluster of white “ger” tents.

Eventually, the train will pull into Ulaanbaatar, Mongolia’s capital and home to 50% of the population. Swapping tents for bricks and mortar, this town marks a perfect blending of Russian and East Asian influences as Mongolians slowly adapt to urban life. A city like no other, no visit to Ulaanbaatar would be complete without a visit to the city’s famous Ger-district, where urban residents continue to reside in traditional nomadic style. Better yet, arrange for a guide to take you out to stay with a nomadic family and experience first-hand yurt-life, likely complete with bowls of yak meat and warm, salty milk.

As the train crosses the border into China, the landscape changes. Open hillside begins to morph into urban cities, vast megacities with suburbs that extend for hours. No less beautiful, however, the scale of Chinese infrastructure can be truly awe-inspiring and as one of the most geographically varied regions on earth, this is not a time to shut the carriage curtains. Views from the train beforeBeijing offer glimpses at rice paddy fields, towering rock formations, rivers and beautiful pagoda-style buildings, before ploughing into giant cities, rows and rows of tower blocks jutting out to the sky.

After eight days, eight time-zones and likely hundreds of instant noodles, the train finally reaches its destination. From one capital to another, the journey on this train takes you from the European heart of Russia deep into East Asia.Though a global economic and technological centre, Beijing is also one of the oldest cities in the world, and its rich history of emperors and conquest can all be explored from within the city’s centre. The Forbidden City, Temple of Heaven and Summer Palace are all within a short metro ride of each other, as is the embalmed corpse of Chairman Mao in Tiananmen Square. Beyond the major tourist sites, the best way to see old Beijing is to get lost in the Hutongs; small maze-like alleys walled by traditional buildings and often bursting with small boutiques and food shops.

Leaving the city centre, no visit to Beijing could be complete without seeing the wonder of the world; the Great Wall. Built to keep out invaders from the very region you just travelled from, the wall marks the perfect end to a journey steeped in history.This is the beauty of the Trans-Siberian Railway. More than simply a romantic journey into the exotic Far East, the lives and stories experienced along the way bring histories and cultures to life beyond the conflicts and the borders that separate them. Every community conjures fantastical stories of those faraway from them, so to cut through the unknown and truly experience the lives of people from one end of the world to the other reveals not just the great diversity of our ways of living, but ultimately, just how connected we all in fact are.

🚂 Starting from Skratch? Here are a few links to get you started:‍ 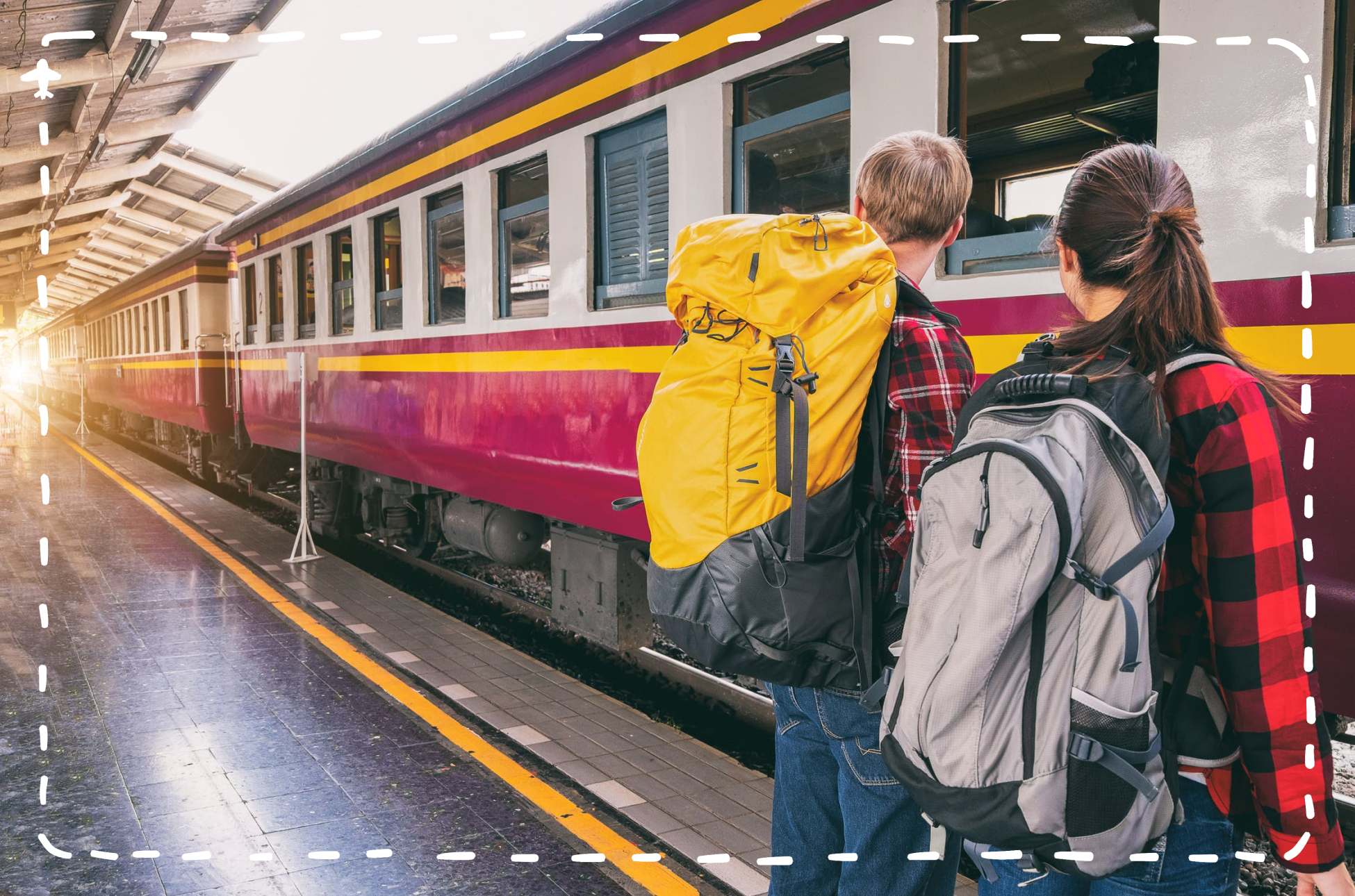