Planning for the end of the world might feel a little sci-fi to some, but for others? It’s a full-time job! For over a decade now, in one of the most remote corners of the world, scientists have been constructing and maintaining a global seed vault, home to the largest collection of seeds on the planet. In the event of a global natural disaster, or regional loss of a gene bank, this storage facility holds the key to restarting our agriculture and human life as we know it.

The “Noah’s Ark” of Seeds

Where to put the most important backup facility on the planet? Where is it most likely to survive the devastating effects of flooding, volcanic eruptions, meteor attacks, nuclear war or hurricanes? On the small arctic island of Spitsbergen, it turns out. Located within the Norwegian archipelago of Svalbard, this formidable seed bank rises dramatically from the mountainside – looking like the icy lair of a Bond villain. Strictly closed off from the public, the vault is co-managed by the Crop Trust, the Norwegian Government and the Nordic Genetic Resource Centre (NordGen).

Back in 2004, rising pressure from agriculturalists and scientists forced the Norwegian Government to consider the construction of a large-scale seed bank. Seed banks, or gene banks as they are also called, already existed in most countries worldwide (it is estimated that there are 1750), but no attempts to make a major, universal bank had been attempted before on this scale. Set against the backdrop of the Iraq War, where rioters had destroyed a major seed bank and in doing so, lost certain ancient varieties of lentils and chickpeas, international interest groups were keen to prevent the irreversible loss of staple food crops ever happening again.

Svalbard was selected as the most effective location, due to its position above sea level, lack of tectonic activity and permafrost landscape. Following a period of construction, the bank officially opened on 26 February 2008. By today, the vault has had more than one million different samples deposited – a significant proportion of the world’s crop diversity (yet still scratching the surface of the actual biodiversity of our planet!).

To this day, only two withdrawals have ever been made, following the destruction of another major gene bank during the Syrian civil war. A large withdrawal of seeds was agreed between international parties and subsequently used to be planted in fields across Lebanon and Morocco. Once the seeds had been effectively multiplied, new seeds of the same variety were placed back in the Svalbard bank, as well as new regional seed banks. In general, however, all seeds are accessed from regional banks long before they ever have to be removed from the Svalbard facility – designed to be a last-resort, “Noah’s Ark” of seeds.

What Happens When the Failsafe Fails?

When interviewed for the Economist, the facility’s main architect, Cary Fowler, spoke with great fondness of his creation. “When I see this”, he said, “I just think, ‘thank goodness, they’re safe’”. However, not everything has gone according to plan in the bank’s first decade. Unusually high temperatures in the summer of 2016 led to melting of the surrounding permafrost and subsequent flooding of the interior passages. Panic ensued, as agricultural groups worldwide inquired into the welfare of the seeds - but none were damaged. Stored deep inside the mountain, the seeds were far away from the entrance passages the water had reached. However, it was a chilling wake-up call. Work has been done to increase the security of the facility against the elements, but with rising temperatures and sea levels, who knows whether the facility will hold out against climate change? It seems the backup of the backup may not be so failsafe after all.

Dark tourists, curious adventurers and “doomsday” obsessives alike have naturally expressed great interest in the vault, and there are growing calls for the site to allow visitors. However, in the interest of preserving the seeds and preventing damage from too much footfall, the site is strictly private access only. That’s not to say that hikers and tourists can’t come view it from the outside. Svalbard is a highly protected area, with two-thirds of the island classified as nature reserves, national parks and sanctuaries. This makes for gorgeous exploration. Driving across open expanses of rugged glaciers and sweeping mountains, visitors can be sure to glimpse polar bears, reindeer, Arctic foxes and birds. It is also one of the best places to catch the world’s most spectacular natural phenomenon – the northern lights.

From whale and polar bear safaris to dog-sledding and brewery tours, Svalbard has a surprisingly vibrant tourist scene, particularly for those looking to have a truly off-the-beaten-track adventure. The neighbouring town of Longyearbyen (literally “Long Year Town”) is the world’s northernmost settlement! Fascinating in itself, this small town has a population of 2,368 people, most of whom work in the mining industry. It has three kindergartens and a school. A high minority of Svalbard residents are ethnically Thai, following a large migration of workers during the 1970s. This is reflected in the presence of a Thai supermarket in town, as well as various Thai cultural events that are put on locally each year. Daily 3-hour flights connect Longyearbyen to Oslo.

Though officially part of Norway, Svalbard is also home to a set of unique laws. Cats are banned from the island, a strict limit on monthly alcohol purchasing is set in place and all individuals must legally carry a rifle on their persons every time they step outside! This is to protect themselves from polar bears. Even more bizarre, it is effectively illegal to die on Svalbard. If a resident is terminally ill, they must move to the mainland. The reason for this is because the ground is made of permafrost, meaning any bodies buried underground will be perfectly preserved. This became a major issue when it was discovered that the bodies of people who had died as a result of historic viruses, such as the 1918 flu pandemic, were starting to appear on the surface, as the permafrost surrounding them melted. Aside from being downright horrifying to any casual wanderer through the cemetery, the risk is that these bodies may even carry live strains of these archaic diseases, potentially reinfecting them back into the wider population – and we all know what happens then...

Never Mind the Seeds, What About the Oreos?

Finally, if you were to look at the seed bank on Google Maps, you might be surprised to notice a small second bank right next to it, named “Oreo Vault”. This is in fact exactly what you think it is - a bank for the preservation of Oreo cookies. The product of a particularly inspired marketing campaign, Oreo cookies decided in 2020 to erect their very own doomsday vault to preserve Oreos (and their secret recipe) against any natural disaster. Releasing an accompanying video, in full mockumentary style, the tagline reads: “In case of Apocalypse, go to 78°088’5.8.1”N, 16°01’59.7”E”. Check it out below: 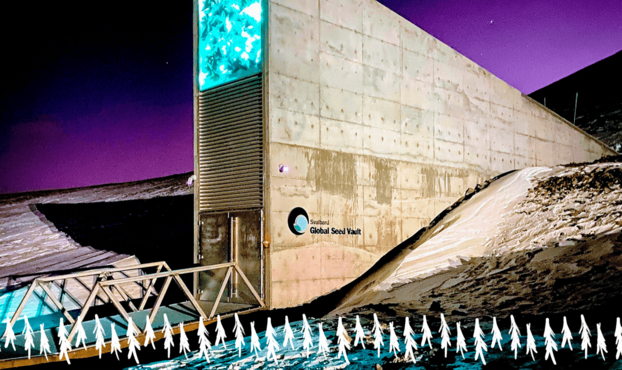 Norway - Facts before you go