Nashville: And Why You Should Go To Memphis Instead

If you happen to be cruising down Route 66, heading for Nashville, keep an eye out for the sign in bold letters spelling M E M P H I S. As soon as you see it, hit those brakes, make that turn, and don't stop until you’ve reached this soulful southern city of BBQ, breweries, full moon kayak parties and, yep - Elvis!

Memphis lies about 200 miles south west of Nashville, on the banks of the Mississippi River. At first glance -  these two Tennessean cities seem pretty identical. Both are located near huge rivers, have historic music scenes, famed local dishes, well-known museums and bridges that characterise their riverside skylines. In this post, we'll take a closer look at how these cities differ and exactly why you should be heading to Memphis instead of Nashville.

As a city, Memphis is not falling over itself in an effort to please tourists. Nashville, on the other hand, can seem a bit like a tourist attraction that just happens to be a city - especially with its mass of honky-tonk bars and party buses. All of this is fun stuff, yes, but the more local, low-key nature of Memphis is what really charms.

This will be clear once you’ve spent a day wandering around riverside breweries, lounging on lawn chairs in waterfront parks, tucking into the city’s famed BBQ offerings, or just listening to live music against the backdrop of a Mississippi sunset.

Just like all destinations that are less touristy, the experience you have in Memphis is going to be more about what you make of it and not what someone else tells you is fun. That being said, admittedly, we do have a few suggestions where to find fun in Memphis. So read on for our guide to Memphis's music, museums, Mississippi and ducks!

Memphis is most definitely a city for music lovers.

True, Nashville holds the official title of America's “Music City”, but Memphis has its own hard-hitting music heavy-weights. Aretha Franklin, Al Green, BB King (even Justin Timberlake!) all hail from Memphis, and Elvis called the city home for most of his life. Whereas Nashville is known for country music, in Memphis it's all about Blues, Soul and Rock & Roll.

The city's musical identity is celebrated during the annual summertime Beale Street Festival which takes place in Memphis every May. If you can organise your visit to coincide with this festival - you're in for a treat. You'll be able to jam to the best “then” and “now” sounds of the city, and also catch big headline acts such as Erykah Badu, Kings of Leon or Snoop Dog, who all performed in the past.

Of course there is also Beale Street itself - the famed downtown promenade packed with juke joints and bars. This summer, free outdoor concerts are taking place every week here, and all year round, the best time to walk along its pavements is in the evening, when you can experience Beale Street in its full neon glory and find out what makes Memphis such a stand-out music city.

When visiting a new city, spending time wandering around museums isn't always everyone's favourite thing to do. Memphis, however, has an incredibly rich history which deserves to be discovered in the different museums which dot the city.

So, after an evening spent listening to local live performers, why not learn more about the history of Memphis music and head to a museum. Top spots include Graceland - Elvis Presley’s former home, as well as Stax Records and Sun Studio -  iconic studios where many legends recorded their hits.

In downtown Memphis, you will also find the Lorraine Motel where Dr. Martin Luther King, Jr. was assassinated in 1968. The motel complex has been turned into The National Civil Rights Museum which will teach you about the entire American Civil Rights Movement, as well as more local narratives that mark Memphis as an important place in African-American history.

Making the most of The Mississippi should also be high on your list of things to do in Memphis.

You might want to take advantage of the easy to use Explore Bike Share scheme, and cycle over the Mississippi along the Big River Crossing which has a dedicated pedestrian and bike path.

One of our top recommendations is to explore the river under the cover of darkness. This can be done during one of the Full Moon Kayaking and paddle board nights that go on throughout the summer. Here, every month, a DJ takes to a floating pontoon to pump out beats into the dark Delta air while you paddle out into the harbour.

If rooting out the random is an integral part of your travelling style, you might want to visit the Peabody Hotel and watch the Duck March - an unmissable spectacle where, at 11am every morning, a favoured troupe of well-mannered ducks descend in an elevator and waddle down a red carpet towards the lobby fountain. These ducks are guided by none other than “The Duck Master”, which is an official title and possibly the best job ever. A detailed history explaining this tradition does actually exist, but regardless, just - why not?

The Memphis food scene is pretty serious about BBQ and those hotel ducks might be the lucky ones as even BBQ Spaghetti is a thing in this city.

Of course every spot promises the best BBQ in town, but rumour has it that Central BBQ and Payne's are well worth the hype. And if you are not as BBQ obsessed as the locals, fear not, as the city is full of other kinds of wonderful, less meaty, eateries. We recommend Hog and Hominy for Southern Influenced Italian dishes.

Also - if you want to really indulge in all things Elvis during your stay, the "Elvis Sandwich" definitely deserves a shout-out. This deep fried bready affair of peanut butter, jam and bacon was reportedly Elvis's go to snack, and can be sampled at an old school American diner downtown called The Arcade.

Grabbing a drink and feeling like a true Memphian for the night, means heading to Earnestine & Hazel. This place is an iconic, come-as-you-are, dive bar, which has quenched the thirst of many legends over the years. Mick Jagger, Keith Richards, Little Richard, Aretha Franklin and Tina Turner have all drank here, so we are pretty sure that it will do the job for you too.

If local craft beer is more your thing, there are many dedicated breweries around the city, and another good place to keep on your radar - with brews, cocktails, and much more - is Railgarten which, by its own admission, is “difficult to describe, but easy to find yourself here all day or night”. 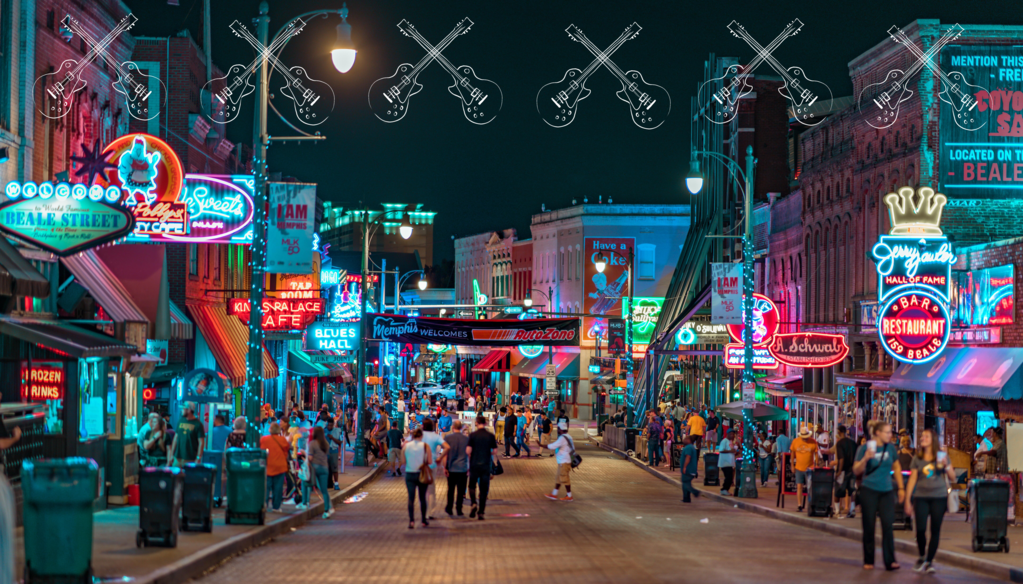 Memphis - Facts before you go

Tipping is expected - generally at 15%.