With such a well-developed travel industry, encompassing sprawling resorts and beachside hotels, it’s easy to take a trip to Greece and never step outside of the tourist bubble. However, just a short step off the main strip lies one of the oldest civilisations in the world - the accumulation of thousands of years of knowledge and culture. Spotlighting one aspect of this rich heritage, today we’re exploring Greek music in all its forms, from the birthplace of classical music in ancient times, to laiko pop in 2021!

Musical literacy was always a core part of the education of wealthy boys during ancient times. Instruments such as the lyre – made from tortoiseshell - and the double-reed aulos, were taught to boys to enhance their performing skills, status and spirituality. Festivals and competitions were also held across the region, for musicians to compete for fame and power. Lyric poetry was also highly favoured during the classical period.

The Greek musical modes, including simple scales and octaves, went on to eventually inspire the classical music notational style we are still taught in music theory today, making ancient Greece essentially the birthplace of classical music (and practically every other genre in turn). Even the word “music” derives from the legend of the nine “muses” - the daughters of Zeus and Mnemosyne!

Traditional Greek folk music is known as Dimotika and emerged during the Byzantine period onwards (with some commonalities to ancient Greek styles). Typically made up of clarinets, violins, laouto, lyras and tambourines, the sounds are a complex combination of influences, ranging from Eastern Europe, to Ancient Greece, to the Middle East (and Anatolia in particular). Evolving in tandem with local dance, costume and performance practices, the lyrics are often humorous poems, recounting stories of love, war or nature.

The songs which emerge from the Aegean Islands are known as Nisiotika and many of the various Greek islands have their own unique folk traditions. Cretan music (music from the island of Crete) has particularly done well overseas, following the release of the movie Zorba the Greek.

During the 1970s, Nisiotika had a huge revival of interest, thanks in part to the popularity of singer Mariza Koch, who performed at the 1976 Eurovision Song Contest. Check out her powerful, political performance below, with accompaniment on the Laouto:

During the 20th Century, another genre was on the rise, traditionally associated with the poor and working classes. This style became known as Rebetiko and originated in the urban centres of Athens and other major Greek (and neighbouring) cities. Many early rebetiko singers were drug-addicts, criminals or refugees, outcast by mainstream society and encouraged to turn to music to give voice to their struggle. Accompanied by the bouzouki (another instrument of the lute family), performance of these songs was often tightly regulated, particularly during the Metaxas dictatorship.

This, along with Laïko music, was eventually adapted to better suit upper class listeners, diminishing some of the harsher elements and allowing the genre to step further into the mainstream. Both genres became highly associated with leftist political messages, criticising government and other forms of oppression during the turbulent mid-20th century in Greece.

Another genre incorporating the bouzouki is the recently coined term Greekadelia, a local blend of folk music and international psychedelia. The term's origin traces to the 2012 album “Greekadelia” by Kristi Stassinopoulou & Stathis Kalyviotis, a perfect blend of bouzouki instrumentation and mind-bending guitar hooks that warrants a track-by-track listen. However, the distinctive sound can be heard in various tracks released during the height of the psychedelic era, during the 1960s and '70s.

Below is a calming, hour-long video of music played on the bouzouki – perfect as a study/work playlist, or for those looking to mentally transport themselves to sunny Greece!

Modern Greek music is often known as “modern laika” or “laiko pop”. Combining elements of bouzouki and other folk styles with popular modern music technology and sounds, laiko pop is heard everywhere, from the radio to nightclubs. Much like the rest of the world, modern pop music is a mixed bag, with many songs considered soulless dance tracks. However, various local artists and producers stand out from the crowd. Nikos Karvelas (and his frequent collaborator Anna Vissi) are legendary throughout Greece. Leading the contemporary dance scene is Tamata, one of the most influential artists in Greek pop today. Below is a weekly updated playlist of some of the biggest Laika and Moderna hits in the country, so you can be sure to stay up to date on what’s got Greeks dancing this week:

Where to Go to Hear Greek Music:

Throughout Greece, there are several different types of musical establishment. Those that play live Greek music, and nightclubs that play pre-recorded Greek and international music. These might be catered to tourists or internationals at resorts, or they might be entirely local, for communities to come together and dance.

One such place is a bouzoukia, a Greek folk music hall where singers and guests alike dance, pass round jugs of ouzo, yell out “oppa!” and generally get very very drunk. One of three traditional dances are put on at these events: the Zeimpekiko, the Tsifteteli and the Greek folk music dance. These dances are so popular, that tables are often reserved days in advance to get the best position. Up until the 1970s, there was also a bizarre tradition of “plate smashing”, in which plates were thrown at performer’s feet. This was outlawed, mainly due to the risk of injury, though expectant tourists continue to visit bouzoukias hoping to get a glimpse of some plate-throwing action. Instead, revellers prefer today to throw other items, such as flowers or napkins at the performers, and flowers are often seen on-sale at the entrance to the club. For a truly local experience in Greece, paying a night-time visit to any street corner bouzoukia is bound to be a raucous, silly and magical night.

Top bouzoukias to visit in Greece are:

Of course, like the rest of the world, Greece has its fair share of nightclubs. We may not be talking about the trendiest or highest quality establishments here, but if you want cheap booze, international pop hits and some fun in the sun, Greece has a long history of delivering just that. Head down to any coastal town – such as Santorini, Mykonos, Kavos or Malia, and prepare for a hedonistic weekend of mayhem. You may not find a single Greek local, but you’ll certainly find a thousand drunk Brits, ready to party with you and dance your cares away.

“Top” nightclubs in Greece are:

Hopefully, this list has provided much to inspire your next trip to Greece. From exploring the fascinating history of Greek musical theory and its legacy today, to dancing on a table in a local bouzoukia, why not make music a central element of your next adventure? By exploring with your ears, you can open yourself up to all sorts of new experiences, absorbing the culture, poetry and politics of an ancient nation.

Finally, check out this excellent video by musician Nikolas Raptakis, who, performing acappella, charts 100 years of Greek music evolution, from 1900 to 2000:

Starting from Skratch? Here are Few Tips to Get Started: 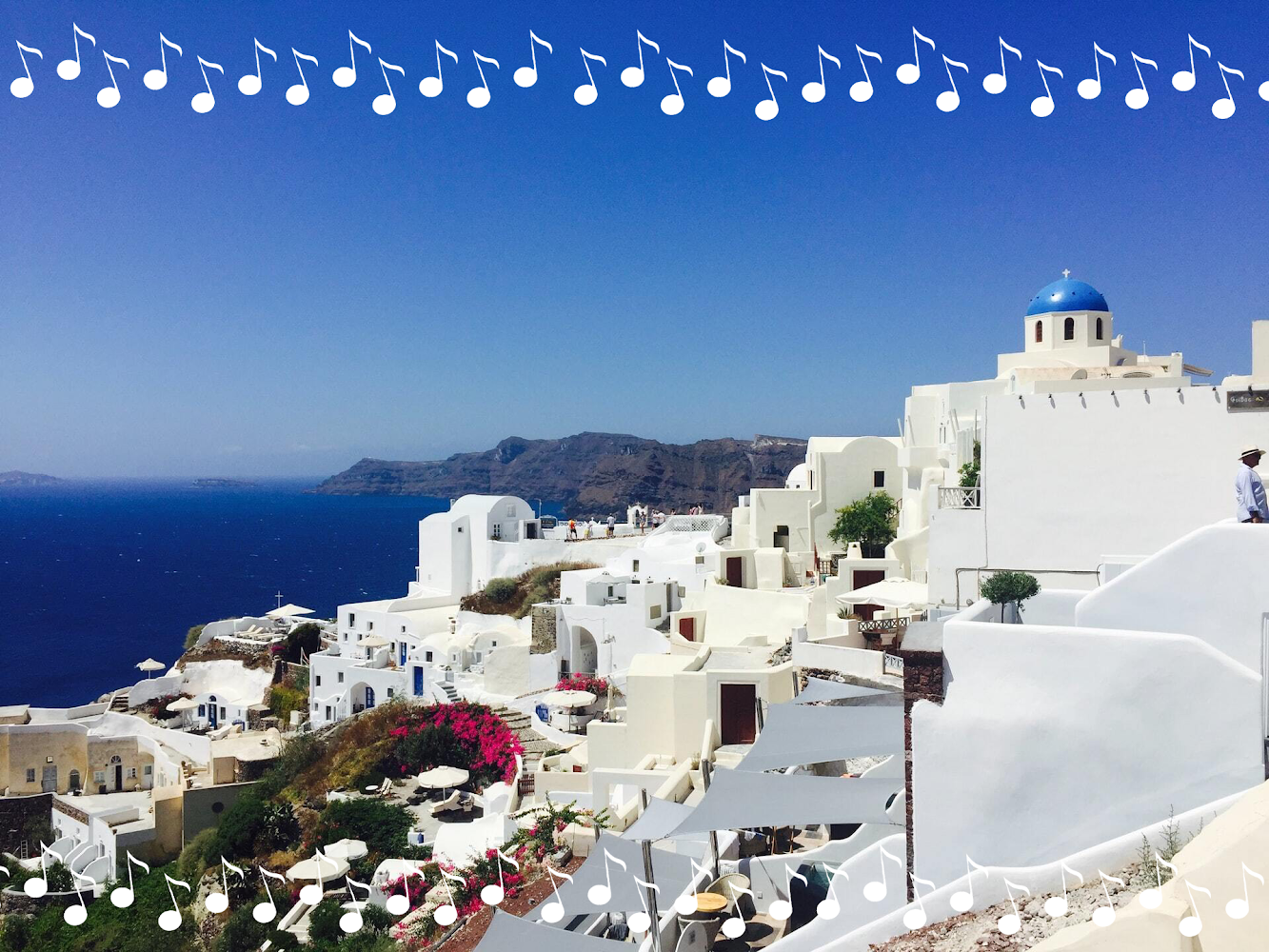 Greece - Facts before you go