In the first weekend of October every year, in the small Western province of Bayan-Ölgi in Mongolia, a small band of local Kazakh eagle hunters gather to display their skills and compete for prizes. Or at least this was the case around 20 years ago, when the festival first gained official recognition. Today, the Golden Eagle Festival has reached global fame, expanding far beyond its humble beginnings to a major international festival and coming to represent a vital symbol of Mongolia’s rich and diverse cultural heritage.

What is Eagle Hunting?

Eagle hunting is an ancient practice, requiring great technical skill. Traditionally, eagles are taken from their nests at birth or even captured and trained from adulthood to catch animals for the hunter. Usually on horseback, the hunter will hold the vast bird high beside him on a gloved hand and unleash the blindfold from its head when a fox is in sight. The eagle will then lift off from the hunter’s arms, soar through the sky and plummet down onto its prey, before bringing it back on command. This kind of relationship between man and bird takes years to develop and requires the passing down of ancient knowledge, usually from father to son.

Though change is inevitable for an adapting society, many older Kazakhs (and Mongolian herders in general) fear for the loss of ancient practices, and it is for this reason that festivals such as the Golden Eagle have become so important

Origins in the Region – A practice Endangered by Modern Life

Eagle hunting is particularly attributed to the traditions of the Kazakh people, a Turkic ethnic group of central Asia. During Soviet control of Kazakhstan, many Kazakhs fled into the Westernmost region of neighbouring Mongolia, forming an isolated tight-knit community. For most of the 20th Century, traditional hunting techniques and nomadic lifestyle practices were passed down from parent to child, their isolated nature allowing for little external influence.

However, with the rise of globalisation and the internet, Kazakh youths are increasingly exposed to the demands and opportunities of modern life. Today, many children opt to leave the nomadic lifestyle and head to major cities (such as the capital, Ulaanbaatar, which now houses 50% of Mongolia’s population). Here, they may go to university and get jobs, leaving the herding life forever. Though such change is inevitable for an adapting society, many older Kazakhs (and Mongolian herders in general) fear for the loss of ancient practices, and it is here where festivals such as the Golden Eagle have become so important.

For many, it is primarily about educating Kazakh youth about the skills of their ancestors, and inspiring young people to learn the skills and carry it on for a new generation. In other ways, it is also an excellent way for Kazakhs to come together and celebrate their cultural heritage, often coming from all over Mongolia (and internationally) to drink, eat and swap stories.

The Festival – Planning your trip

From its humble beginnings, the festival now attracts huge numbers every year, with flights and local accommodation known to sell out up to 10 months in advance. On an international level, curious travellers and photographers in particular, often make the long journey to the region, eager to snap a shot of these majestic hunters in action. Generally, visitors fly in to Ulaanbaatar and get a connecting flight to Ölgi, the provincial capital. For the braver, a 25+ hour journey from Ulaanbaatar by car (generally a rickety Soviet wagon) makes for amore memorable, yet exciting, adventure.

For this reason, combining a trip to Mongolia with a visit to this festival, though highly recommended, requires some careful planning. Flights are often difficult to book from outside the country, and it may therefore be easiest for visitors to go through a tour company. For a fair price, guides will arrange everything from your flights and accommodation, to driver and meals. They will also be an excellent intermediary to help you chat to locals and find out more about this fascinating practice and some of the key contestants involved.

If you choose to go it alone, it is recommended you at least hire a driver. Most companies will offer a driver for around $100 per day; an inexpensive option if divided between several riders. The Mongolian landscape is huge, barren and harsh, and though spectacular, requires excellent insider knowledge in order to be navigable.

The Main Event – Getting the Most out of Each Day

Once at the festival, it is important to get to the site early each day. Spectators form a U shape around the contestants, and in order to get a clear view (amidst a sea of eager photographers) an early start is a must. Bring a camping chair and a packed lunch and settle in for a long day of festivities.

The day begins with a display of the hunters and their eagles. Due to a 2016 documentary named The Eagle Huntress, the main star of this event in recent years has been Aisholpan Nurgaiv, a young Kazakh girl and local legend, who rose to fame after becoming the first ever female eagle hunter competing. The movie about her journey achieved an international release and catapulted her to fame on a global scale. Today, it is her especially that many visitors come to see, hoping to snap a photo of her in action.

Following the parade, the competition begins. The schedule of the day involves various challenges based on skill, speed and appearance. Hunters must display their speed on the horse, an ability to grab game whilst riding, and the adaptability of their eagles. They will be judged too on their displays of costume. On the second day the festivities take a more relaxed tone, with a camel race, and comical chase between boys and girls on horse-back (the girls may whip the boys if they catch up).

Eventually, the award ceremony crowns the winners and there is a closing parade. Throughout the festival, locals gather over food and drink, and local crafts are displayed for sale. Rugs, hats and fur goods are presented, all representing a unique aspect of Kazakh craftmanship. Food services are limited, and almost entirely in the form of various meat (Mongolia is not a country for vegetarians). For this reason, it is recommended for those visiting outside of a tour group to prepare a packed lunch from the grocery store in town.

Photographers – Tips for Staying Respectful and Getting the Best Shots

As stated previously, the festival is predominantly popular internationally amongst photographers. As the festival has evolved, contestants are aware of the importance of photography as a central aspect of the parade and are generally comfortable and willing to be photographed.

That being said, there have been cases in the past of visitors getting in the way of the hunt and generally acting in a pushy and disrespectful manner. It is important to realise that this is predominantly a local festival, for Kazakh people to come together and remember their collective cultural heritage. Asking politely and occasionally even offering a tip, when appropriate, can make all the difference, and ultimately build a better relationship between locals and the international community.

Within the family ger, two pillars stand in the middle, representing the mother and father. This should never be walked through, as it would symbolise the breakup of the marriage

For many visitors, when hotel accommodation is sold out, staying with nomadic local families might make a cost effective and more interesting option. In this case, it is important to be respectful and understand the subtleties of Mongolian and Kazakh cultural practices. Within the family ger (yurt tent) two pillars stand in the middle, representing the mother and father. This should never be walked through, as it would symbolise the breakup of the marriage. Instead, all individuals must walk around the interior edge of the walls. Like most societies, eating meals together constitutes an important sign of togetherness, and chance for foreigners to be welcomed, regardless of any language barriers. A typical Mongolian meal generally involves every part of an animal’s body (picture: brains in milk), and so may require a little extra bravery for a Western palate!

Ultimately, the Golden Eagle festival constitutes a spectacular opportunity to see a cultural practice frozen in time, and an endlessly fascinating and awe-inspiring glimpse into a lifestyle very different to most of our own. Not just a chance to see a highly unique Kazakh tradition, it is also a chance to marvel at the sheer breadth and potential of the human spirit, and our ability to adapt to even the harshest natural environments. Though this practice may be endangered, by celebrating and documenting its intricacies now, we can help ensure that these skills are preserved forever, and passed down to any willing girl or boy for generations to come.

Starting from Skratch? Here are a Few Tips to Get you Started: 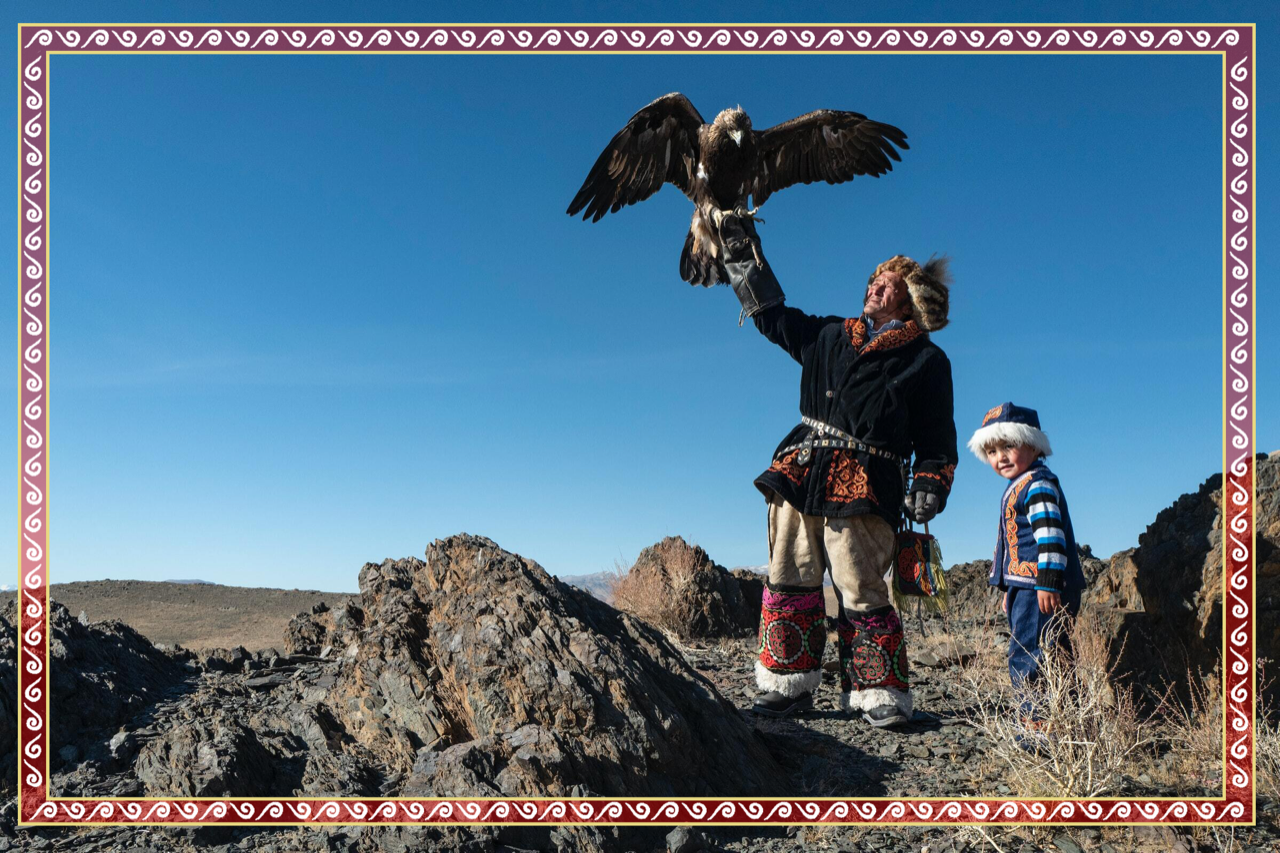