Black Panther and no doubt its sequel Wakanda Forever are films with great cultural impact. More than simply a thrilling Marvel superhero movie, the film’s success lay in its utilisation of fantasy storytelling to articulate a narrative of black prosperity, dreaming up a universe in which an African nation is the richest in the world, and finally offering black audiences an optimistic glimpse of a proud future for Africa. With a black lead, black director and majority black cast, the movie has inspired movie-goers worldwide and gone beyond simple representation to present a narrative that is African to its core. In this article, we look closer at Wakanda, exploring the African cultures that inspired it: from its skyscrapered Golden City, diverse tribal groups and incredibly detailed costumes.

The design of the movie (and the comic book that inspired it) owes a huge debt to Afrofuturism, an aesthetic and philosophical movement that aims to combine science fiction and African political theory to imagine a future for Africa and its diaspora. After centuries of struggle, following colonialism, the slave trade and structural racism, this movement aims to create a positive narrative for hope and prosperity. Ingrid LaFleur defined it as “a way of imagining possible futures through a black cultural lens”. Since so much of how we perceive ourselves and our identity stems from media such as movies and TV, having black characters and worlds that go beyond racist stereotypes or the constant reminder of oppression is hugely important. The global outpouring of emotion following the release of the film is testament to this, as young black children, whether in the USA or Uganda, get to finally see themselves represented in a context of prosperity, pride and power in an international Hollywood hit.

At the helm of this vision was Hannah Beachler, the movies’ production designer. Having spent months researching in Africa, she compiled a 500 page “Wakanda Bible”, a giant book of designs and aesthetics, that could be used as inspiration for the architecture of this fictional nation. The aim was to create a world that was simultaneously high-tech and futuristic, yet also rooted in its past, combining skyscrapers with traditional African designs.

Wakanda was based primarily on the southern African country Lesotho, an enclave that had historically only lightly been colonised by the British because of its terrain. Much of the production style was also based on architecture from Uganda, Rwanda, Burundi, D.R.C. and Ethiopia. The Vibranium wealth came from the comic books, but Coogler looked to the rare mineral resource ‘coltan’ in Congo as inspiration for its use, as well as the massive historic wealth of the Mali Empire, amassed by the prevalence of gold in West Africa (some historians claim that the ruler, Mansa Musa, was the richest person to ever live). Beachler’s aim was to look at the architecture of existing African tribes and then advance the technology naturally, imagining how a high-tech nation that had never been colonised would look.

Many of the skyscrapers were directly influenced by Zaha Hadid, a British-Iraqi architect whose abstract-shaped buildings are powerfully futuristic. However, to add an African twist, Beachler added rondavel roofs (the thatched roofs typical of rural southern African huts) to the buildings. In interviews she has cited her inspiration as Blyde Canyon in South Africa, where she went on a research trip. The mountain-tops in this gorgeous national park bear a striking resemblance to these types of roofs, giving them the nickname “The Three Rondavels.”

This room was particularly distinctive because of its floating wooden birches. Though not directly influenced by African culture, Beachler revealed in a series of tweets that the logs were inspired by the Native American gift of birch to European settlers as a peace offering, the wood symbolising ancient wisdom and truth. The wood therefore also represents the hypocrisy of the white settlers violent retaliation and the subtle linkage between the Native American and African experience. “We sharpened the birch at the end – weaponizing that truth” she wrote, stating that the sharpness was symbolic of “protecting your ancestry...from those who come to take it”. Such symbolic detailing is so subtle, few would notice it, but it reveals the depth to which political sub-text was laced throughout the movie.

Another element of the film that took great inspiration from African cultures were the incredible costumes. Designed by Ruth E. Carter, every detail of every outfit was meticulously crafted, and the film deserves several repeat viewings if just to admire the costumes.

Dora Milaje is the name for the iconic female army that protected T’Challa and his family. Though based partly on a real-life historic Mino female army, named by European historians as the ‘Dahomey Amazons’, the look of the costumes was mostly based on the Maasai people’s traditional clothing. From red cloth clothes to large, pointed spears, rings of necklaces and metal bangles, the similarities are striking.

The film didn’t just use Lesotho as its basis for Wakanda, it also borrowed the distinctive style of blanket, known as Basotho blankets, worn traditionally by tribal people from Lesotho. This blanket, commonly worn wrapped around a high-status person like a cloak, can be seen worn by W’Kabi (Daniel Kaluuya) in the film. The blanket also doubles as a force field, again showcasing the way African traditional items were blended with technology in the movie. Carter made certain not to appropriate or misrepresent traditional items, travelling to regions like Lesotho and getting permission from locals, as well as buying as many items locally as possible, to ensure the money goes back to African people.

Though the hairstyles used throughout the film vary, and were kept as natural as possible, certain characters were given styles directly traceable to certain African cultures. The elders of the Tribal Council each had a distinct look, with one character given the red clay hairstyle of the Ovahimba women. This style is very distinctive, where a combination of butter, fat and red ochre are combined to form an otjize paste. The paste is often also used to cover the skin as a natural protection against the sun.

Another member of the tribal council has a lip plate, a dramatic accessory which stretches the lip. Though featured on a male character, these plates are generally worn by women among the Mursi in Ethiopia (amongst other places). At age 15 a girl’s lip is given a small incision and stretched with a small wooden plug, before gradually enlarged over time to accommodate a plate. Though this practice has been slowly declining in recent decades, fascination by foreign tourists has kept the practice alive to tap into tourist income, raising questions as to the ethics of tourism in these parts, in promoting this painful practice on young women.

One of the most distinctive costumes in the movie was worn by the Queen Mother Ramonda (Angela Basset), in the scene where she first greets hers on T’Challa back in Wakanda. With a stunning matching robe and wide circular headpiece, the outfit was positively regal. That particular style of hat can be traced to Zulu culture, where women have traditionally weaved hats from grass and cotton to wear on special ceremonies such as weddings. The hat is known as an isicolo and have been known to reach a metre in diameter. Ramonda’s white headpiece was not woven and instead was carefully 3D printed to match the look. 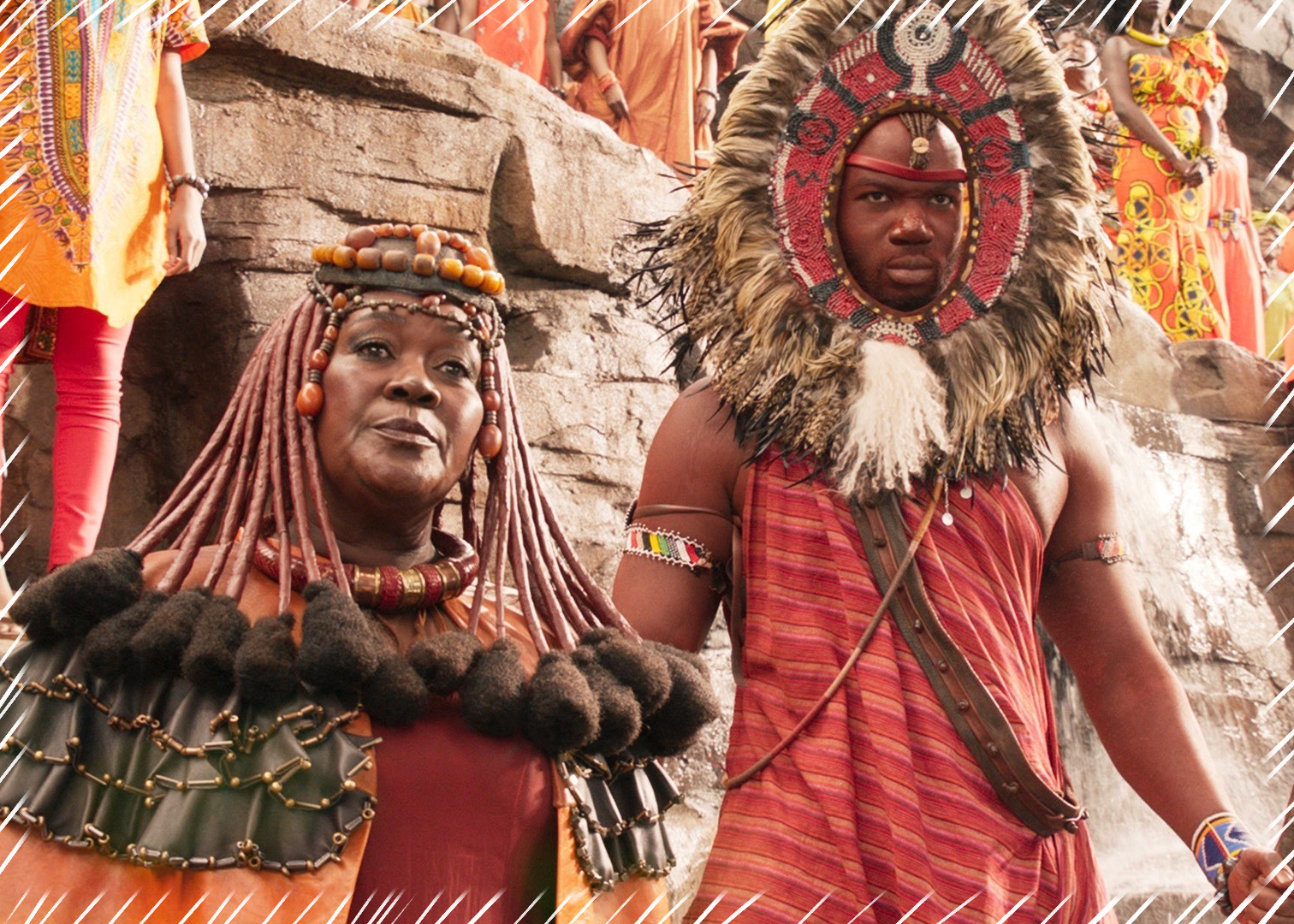