Visiting Hiroshima – A Sombre Glimpse Into a Frozen Past

On August 6th, 1945, at 8:15am, an atomic bomb was dropped on the city of Hiroshima, killing at least 70,000 people immediately and hundreds of thousands more over the next decade, due to complications from radiation poisoning. Today, Hiroshima is still yet to fully recover, and the long-term effects of the attack can be seen everywhere, from inherited PTSD, to continued stigmatisation of hibakushas (survivors). Nevertheless, the city has been largely rebuilt and is once again a thriving centre of industry. In this article, we explore Hiroshima’s tragic past, and what you can expect from a visit to ground zero.

During World War II, the Allied Forces were looking for a way to force a surrender and end the war. They had been interested in nuclear power for some time, drawing on the work of German scientists Otto Hahn and Fritz Strassman. Supported by huge financial backing during the war, US work on the possibility of weaponizing nuclear energy was greatly fast-tracked under top secret conditions. This work was given the name the ‘Manhattan Project’, and by 1945, two atomic bombs had been produced: “Fat Man” and “Little Boy”.

There is still conflicting evidence as to whether the US forewarned Japan of the bombs. Leaflets were dropped from planes beforehand, threatening the possibility of an attack on major cities, but not mentioning Hiroshima. Even several of the pilots onboard the planes that coordinated the attack were unaware of what it was. Needless to say, Hiroshima was not pre-prepared, and on the morning the bomb was dropped, the impact was devastating. In the first few minutes of detonation, between 70-80,000 people were killed, the vast majority civilians. Around 12km of the city was demolished and fires broke out that spread even further. Over 90% of the city’s doctors were killed and all emergency services were decimated.

The news of Hiroshima’s destruction by atomic bomb did not fully reach Tokyo until the next day, when US President Truman announced the strike. In fact, Prime Minister Suzuki largely ignored the attack, resolving to fight on and maintain their strict terms for surrender. It was not until the US dropped a second bomb, this time on Nagasaki, that they finally surrendered, and the war officially declared over.

2020 marked 75 years since the attack. Socially distant vigils, memorial events and remembrance ceremonies were held across the nation, with the Mayor of Hiroshima, Kazumi Matsui, leading a service for survivors and their descendants in the city’s Peace Park. In his speech, he remembered the widespread fears that ‘nothing will grow here for 75 years,’ but praising the way that ‘Hiroshima recovered, becoming a symbol of peace’. Hiroshima’s recovery has been staggering, becoming the largest city in the Chugoku region of Honshu and now boasting a GDP of $61 billion. Because of its total reconstruction, the city is hugely modern, with towering skyscrapers, expansive malls and gleaming hospitals. Even the city’s historic castle was rebuilt, now serving as a museum of Hiroshima’s history prior to World War II.

During the reconstruction process of the city, it was decided that ground zero (the bombs centre-point) would not rebuild as a hub of industry. Instead, a park was built at the centre, named the Peace Memorial Park. This beautiful green space was built to serve as a comforting natural space for residents to explore, and also a reminder of the horrors of the past. A Peace Memorial Museum was built to educate visitors on the events of 1945 and the repercussions to this day.

Across the river lies the A-Bomb Dome, a hollowed-out cement structure that survived the original impact, despite being just a couple of kilometres from ground zero. Now a UNESCO World Heritage Site, the structure is an eery ghost of decades past. Finally, visitors can pay their respects at the Cenotaph, an arched tomb with a register of names of the dead, now numbering over 290,000. Every year, as people continue to die from radiation-linked illnesses, a ceremony is held, and new names are added. Hiroshima today marks a critical political sight for nuclear disarmament, advocating for peace.

Aside from the A-Bomb Dome, there is very little of the old city to be seen, aside from a couple buildings dotted around town. In the grounds of Hiroshima Castle there is also the ruin of a bunker, from which the first message about the city’s attack was sent out. A tree can also be seen in the grounds that somehow survived the blast.

Hiroshima is connected very well to other cities in Japan by the network of popular Shinkansen trains. For example, visitors can reach Hiroshima from Okayama in just 2.5 hours, or Osaka in 1.5. From Tokyo the train takes 4 hours. Within the city, tram networks are a convenient way to get across town, as well as buses. The majority of visitor attractions are within walking distance of each other, situated around the Peace Park.

Hiroshima is also a very cyclable city, with beautiful routes alongside the city rivers. There are plenty of bike rental companies that offer cheap bikes and route guides, as well as a bike share network, of which tourists can obtain a day pass.

For a guide to combining a trip to Hiroshima with a sleeper train tour of southern Japan, check out our previous article here. 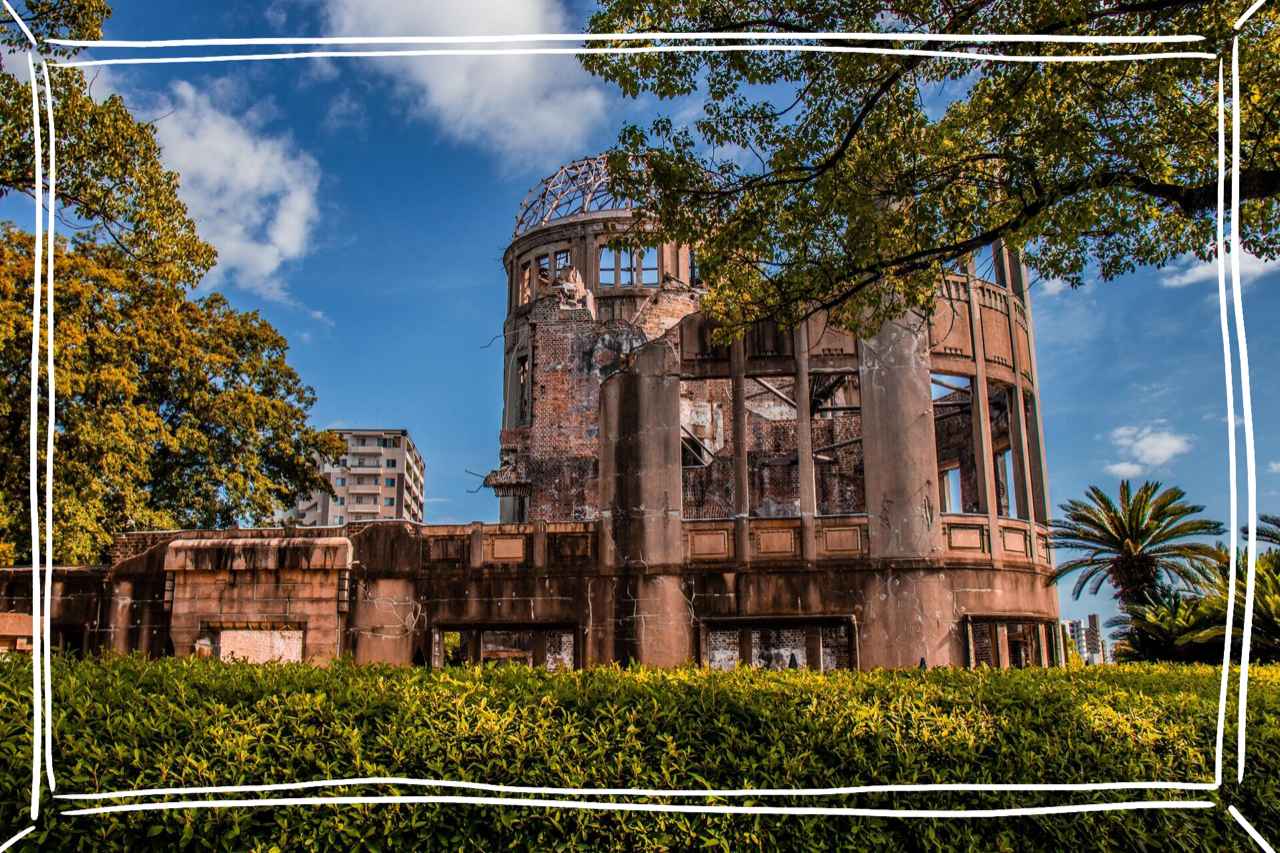 Japan - Facts before you go