Few places carry such an air of absolute serenity as Turkey’s Lake Salda does. Located in the Yeşilova district on the border of the Burdur province, roughly 45 miles out from the city centre, this legendary lake has become an object of fascination for many of the locals as well as garnering international attention.

At an impressive over 1 million visitors per year, it’s no surprise that this body of water has become a fan favourite destination for anyone finding themselves travelling through Turkey. Anyone that finds themselves in Burdur city centre can hop on a bus that will take you to the lake district, whether you take a standard ride or a more tourist-oriented shuttle, you can get easy transport to the lake and the various attractions around it.

Lake Salda boasts a number of impressive features that have drawn the eyes of many a curious traveller. It’s reputation as the ‘Maldives of Turkey’ comes from the stark contrast between it’s dazzling white sand beaches, so dazzling that sunglasses are a necessity on sunny days, and it’s crystal clear waters, often taking on a brilliant blue hue as it perfectly reflects the sky when the clouds are gone. This comparison has become a point of pride for the locals, as the mayor of Yeşilova has the nickname on billboards around the area!

It’s status as an area of stark natural beauty is well earned, holding a spot as one of the cleanest lakes in the world. This is in no small part thanks to efforts of the ministries of environment and urbanisation, agriculture, and forestry combining forces with the presidency to maintain the cleanliness of the lake. The first lady of Turkey, Emine Erdogan, routinely keeps tabs on construction efforts and car usage in the areas surrounding the lake to ensure that it is well protected. At 184 metres deep, it holds the title of the deepest freshwater lake in Turkey, a great point of pride for Erdogan, as she believes it to be ‘one of Turkey's rare beauties’.

Beyond this, the organisations seeking to maintain the quality of the lake have designated a 295 square kilometre protection zone surrounding the lake, ensuring there is minimal construction and emission damage to wildlife and lake itself. There are also rules around the lake that keep cars and campsites at a safe distance away from the shoreline and prevent the use of cigarettes and plastic litter in the area. There are a number of bins, toilets, and cleaning areas spotted around the car parks and eating areas to ensure that as little waste makes it to the lake as possible.

A lot of these conservation efforts are employed due to the incredible biodiversity of the lake and surrounding areas. A number of rare bird and plant species call the lake their home, many of which are approaching endangered status. The cleanliness of the lake goes a long way in ensuring that the surrounding wildlife is happy and healthy, but the humans that visit the lake benefit in much the same way. Along the shore of the lake are a number of natural clay deposits which, alongside the waters themselves, are rich in hydromagnesite and other minerals which have proven to work wonders on the skin! Skip a trip to the spa and simply soak in the lake’s healing waters for easy rejuvenation as the most soothing way to heal potential dermatological diseases.

The variety of natural life found at Lake Salda goes beyond the many different species of plants and birds. The impressively hygienic state of the lake has enabled a great number of microbes, microscopic lifeforms too small for the naked eye to see, to survive and thrive in the waters, even to the point where they have assisted to the formation of the rocks surrounding the shore.

This interaction between the microbes and the geology of the lake has garnered the attention of various NASA scientists, as they have likened the mineralogy and structure of the lake to similar formations that have been identified on the surface of Mars. With these similarities the hope of the scientists is that they are able to discover these microbes living under similar conditions along the planet's surface.

During February 2021, NASA landed its rover, ‘Perseverance’, in the Jezero crater on the red planet with the purpose of digging into the rock formations that bear a similarity to Lake Salda to hunt for evidence of microbial life similar to what can be found in the waters of the Turkish attraction. Should they find any such evidence of life, it would be a tremendous discovery and a great day for progress in man’s mission to develop it’s knowledge of the celestial bodies beyond the one we call home.

Sadly, it is unlikely that we will discover the result of this venture for quite some time. We will be waiting on the rock samples 'Perseverance’ gathered to return to earth until, what the NASA scientists estimate to be 2031. Given the extensive waiting time, the development of the Lake Salda itself will prove to be instrumental in understanding the geology of Mars and whether or not the planet could one day become habitable by more developed lifeforms. Dr. Thomas Zurbuchen expresses his gratitude for the existence of the lake and his hope that it will be with us ‘for a long time’, and with the conservation efforts being made by the Turkish government and the various affiliated environmental organisations assisting in the effort, it’s looking like Lake Salda will be around for us to study, enjoy, and admire for generations to come.

Starting from Skratch? Here are some tips to help you get started: 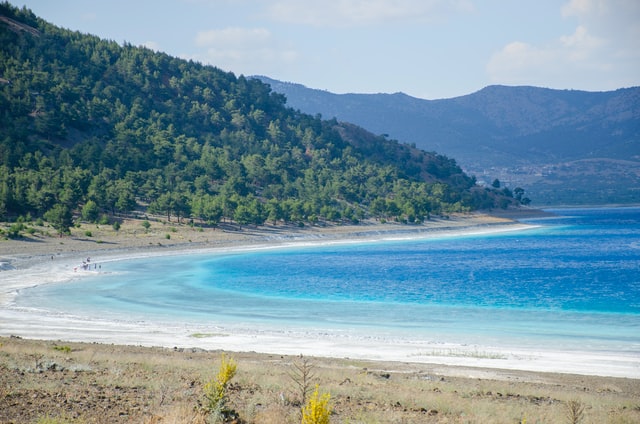 Turkey - Facts before you go

💸 Not expected, but a small tip is welcome in restaurants and hotels