The Most Scenic Train Journeys in the USA

Who doesn’t love a good rail journey? Whether it be lazing in a bunk listening to the chug of the engine, or winding around bends as you gaze out at the horizon – many train journeys constitute adventures in themselves, rather than just a way of getting from A to B. If you want to feel like a pioneer, storming into the unknown, or want to get a glimpse of some of the US’s most spectacular skylines – here are our picks for the most scenic train journeys in the USA.

This journey can be completed in one go by passengers in the sleeper cars, for a comfortable two night stay on the move. Meals are provided, and there is also an observation deck and lounge car for taking in the sweeping mountain scenery.

The California Zephyr is another Amtrak train, this time connecting Chicago with sunny California. Stopping in 35 cities total, the train departs daily to take passengers through Omaha in Nebraska, Denver in Colorado, Salt Lake City in Utah, Reno in Nevada and finally Sacramento and Emeryville in California.

Taking the journey end to end would take 50 hours, just over two full days. The train has a mixture of accommodation options, from coach seats (upper and lower level) to roomettes, bedrooms, family rooms and bedroom suites. Offering breakfast, lunch and dinner in their traditional dining car, this train is the full luxury sleeper experience.

If you’ve ever wanted to discover Alaska, but not known where to start – this journey is for you! Covering 482 miles, this route connects Seward to Fairbanks, taking in Grandview, Girdwood, Anchorage, Hurricane and Denali along the way.

If choosing just one section, opt for the Coastal Classic route, which stretches between Anchorage and Seward, via Girdwood. This journey takes 16 hours and can be completed in one (very long) day, or better off stretched across three or four.  Along the way, expect to see glassy lakes, stunning valleys, and beautiful jagged mountains in this jaw-dropping part of Alaska.

This tourist train ride makes for a thrilling way to see the Grand Canyon, particularly for families. Departing from Williams each day, the train plunges through the Old West, complete with staged train robbery from dressed up bandits! Escaping with your life (and hopefully your gold), the train carries on, with an observation deck to take in the scenery. Eventually, the train chugs into the true star of the show – the breath-taking Grand Canyon.

The train leaves daily at 9.30am and returns to Williams at 5.45pm, giving visitors 3 hours to spend at the Grand Canyon. To stay the night, there are various hotels, including the partnered Grand Canyon Railway Hotel in Williams, to rest after a long day of sightseeing.

This is another family-suited adventure – this time in North Carolina – known as the Great Smoky Mountains Railroad. With a name that atmospheric, you know it will be good! Departing from Bryson City, the train chugs through the beautiful green and orange forestry of Western North Carolina.

This train stretches between Los Angeles in California and San Antonio in Texas, covering 2,000 miles and 21 cities through the wild orange desert. Passing Phoenix, Tucson and El Paso along the way, the views from this train will be a world away from the lush forestry of the Great Smoky Mountains route and other northern trains. Instead, visitors can expect to see dusty deserts and striking flat-topped mountains.

This train takes 29 hours, LA to San Antonio, running 3 times per week. Departing from LA at 10:00pm, the train arrives at San Antonio at 04:50am (the second morning after). Like other Amtrak trains, it contains a coach class, various roomettes, bedrooms, family rooms and bedroom suites, as well as a dining car.

This one might be cheating, since it is mostly in Canada, but a short part of it stretches into Alaska. The White Pass & Yukon Route is largely considered one of the most majestic in the world, for its narrow-gauge track that winds along the mountainside and plunges into winding valleys with shimmering lakes and snow-capped mountain peaks.

Beginning in Skagway Junction, Alaska, the train snakes through Denver, Glacier, White Pass, Fraser, Bennett and Carcross, before eventually pulling into Whitehorse in Canada. This route is distinct in that it has no connections to other railroads, making it totally isolated. The route was originally constructed following the Klondike Gold Rush of 1897, taking gold chasers deep into the treacherous White Pass.

This 350-mile train takes visitors between San Luis Obispo down to Santa Fe, following the California coastline through Ventura, LA, Santa Ana, and Solana Beach. With spectacular sea views and stops, this train is a gem for hopping off and catching some rays on the beach, before clambering back on board to head for downtown LA or a countryside vineyard.

In total, the train covers 24 cities, making 1701 train trips per day (across countless sub-routes). A great mini route for this journey is Santa Barbara to Los Angeles, taking 2 hours 17 minutes and costing just over $20. 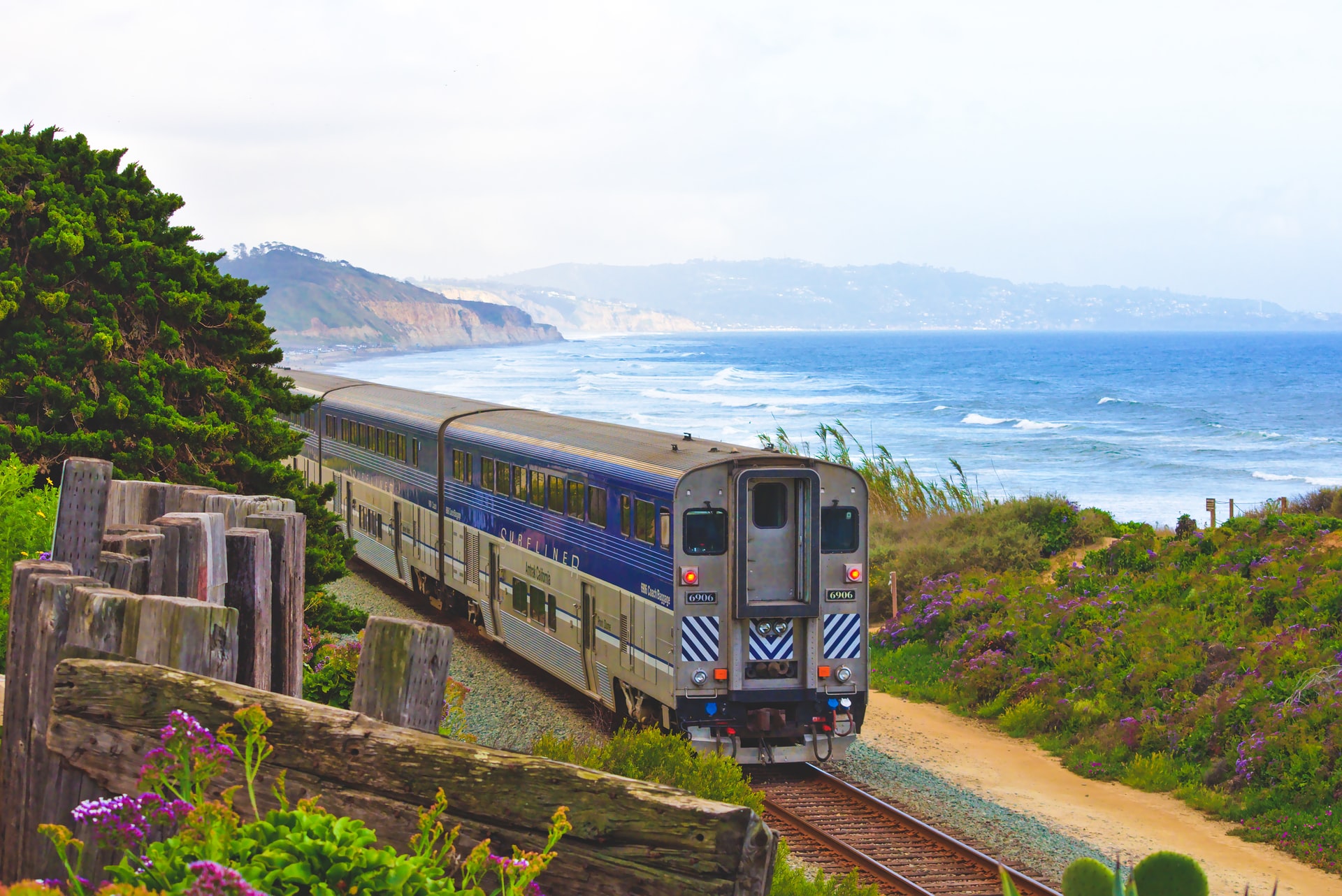 USA Train Journeys – At a Glance