Sometimes a land formation is so striking, that it forms the backbone of an entire universe of religious beliefs, rituals, cultural practices and stories. We’ve seen it with Niagara Falls, the stunning Ha Long Bay and Mount Everest. However, nestled on the banks of the Peñol reservoir in Colombia, El Peñón de Guatapé (or the “Rock of Guatapé”) is another little-known natural wonder, that has quietly been influencing the cultural and religious identities of local communities for thousands of years. In this article, we take a closer look at this bizarre rocky monolith, its recently built winding staircase to the heavens, and its turbulent and fascinating local history.

Around 1.5 hours east of Medellín lies the Peñol-Guatapé reservoir, a vast artificial body of water, flanked by forested mountains. Over the centuries, as erosion wore down the morphology of the land, one distinct patch of granitic rock held its own against the blast of the elements.

Standing at 200 metres (656 feet) tall and weighing an estimated 10-million-tonnes, the monolith is a stark tower against the landscape. Though other surrounding mountains may be taller, the rock’s striking placement along the banks of the reservoir (the result of a government programme to flood the valley in the 1970s), and the views from the top, set the site apart.

Just as formidable as it would have been to indigenous communities many years ago, the rock’s only physical changes mark a genealogy of religious ceremony, ownership disputes and increasingly – tourist development.  From worship ceremonies, to political rivalries, this ancient rock has stood frozen in time, silently watching on as local communities imbued it with powerful meaning. Stories tell of the indigenous Tahamí people worshipping the rock, and today, shrines to Mary and other religious figures dot the iconic staircase track up to the top.

The first documented scaling mission was in 1954, when a group of friends managed to climb the rock using only small wooden boards, wedged precariously into the cracked surface. The mission took five days, but once they managed it, others followed suit. So isolated was the rock’s summit, that an entire new species of plant was discovered growing at the top! The species is now known as Pitcairma heterophila.

The rock has also been the subject of an intense rivalry between two neighbouring towns – Guatapé and El Peñón. Both claiming the rock as their own, bitter disputes have been waged at the other, with even the its name coming under political controversy. For those that side with Guatapé, the rock is recognised as “El Peñón de Guatapé, whereas those that see it as El Peñón’s would refer to it as La Piedra del Peñol. The rivalry stems from the deep-rooted connections people feel to it, and its importance to local identity and history. Perhaps even more important to residents, however, is the tourist income the rock increasingly brings in today.

Evidence of the dispute is all too clear on the rock itself, following an aborted graffiti mission by a furious Guatapé resident. In an attempt to officially claim ownership of the rock, someone recently attempted to write “GUATAPE” in giant white lettering on the side of the rock, only to be caught in the act. Today, the letters “G” and half of a “U” are clearly visible on the stone’s side.

With many others keen to scale the rock, plans were put in place to build an enormous staircase to the top. Sunk into a vast crevasse that juts up the side, the man-made staircase is a fascinating blend of human intervention and natural beauty, giving the rock its now iconic appearance. In many ways just as awe-inspiring as the rock itself, the 650-foot, 740-step staircase zigzags up to the heavens, taking tourists, locals, worshippers and view-seekers alike up its steep crevasse.

At the top, a 3-story lookout tower has also now been built, treating deserving climbers to the ultimate 360 view of the lush reservoir landscape. Many locals now make their living on the side of the rock, selling refreshments, souvenirs and food all the way up (including a bar at the top for refreshing cervezas!). At the base, Tuk-tuk, bus drivers and market sellers wait to whisk you back into town or offer you a personal tour. Nowadays, visitors must pay a small fee to climb the staircase, costing $5.50. It also closes at 6pm.

How to Get to El Peñón

Most visitors will visit the rock as a day trip from Medellín, taking the 2-hour bus from Caribe Metro Station. Leaving daily every 30 minutes, the journey is a scenic, easy ride out and costs just $5 each way. The bus stops both in Guatapé and at the base of the rock, making it a simple journey. Some people choose to visit Guatapé first, to marvel at its beautifully decorated traditional houses and brightly painted streets. Between the bright tuk-tuks and the gorgeous, terraced houses, Guatapé resembles a perfect little off-the-beaten-track toy town and is well worth the visit. 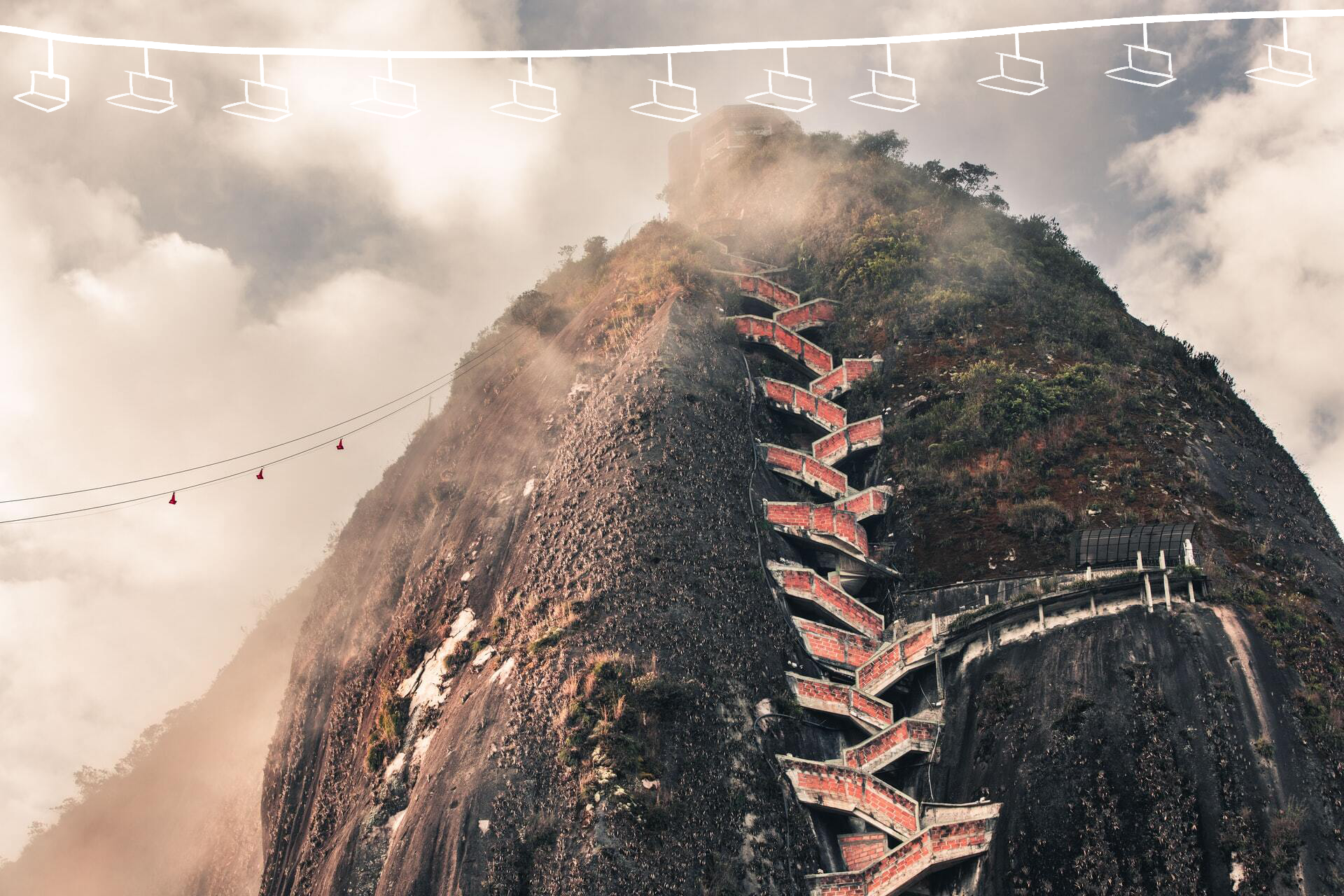 Colombia - Facts before you go