In this article we delve into some of Brazil’s most distinct musical genres, and their place in the history of the country. Exploring their evolution within the political and cultural landscape of the 20th Century and beyond, we consider their impact and their legacy, as well as where you can go to hear them blasting in Brazil today.

From Samba to Sambass, and Frevo to Funk carioca, the music scene in Brazil is as varied and complex as the history of Brazil itself. As the country evolved over the past four centuries, languages, religions and traditions from all round the world contributed to the melting pot that characterises Brazilian culture. During a difficult 20th Century, nationalist interests in defining a distinct Brazilian sound, as well as anthems of political dissent were added to the mix. This laid the foundation for the wide range of Brazilian musical genres heard blasting from the streets, favelas and stadiums of modern-day Brazil.

Undoubtedly Brazil’s most famous musical export, Samba emerged organically throughout the 20th century. As West Africans were brought over to Brazil during the slave trade, traditional African drumming styles combined with local Portuguese musical influences, which eventually evolved into the Samba sound we recognise today.

The most famous use of the Samba sound is in Rio’s gargantuan annual spectacle; Rio Carnival. Taking place in mid-February, this show is a dazzling display of national pride, particularly in its Afro-Brazilian identity. ‘Samba schools,’ regional parade groups, work year-round on their parade, including costumes, giant float, theme, storyline and choreography. Themes generally centre around a folklore or mythology from Brazilian history. Central to the performance is the display of an original samba song, written specifically for the theme and generally focusing on dramatic drumming rhythms.

For those wishing to catch the Samba sounds in the rest of the year, a stroll around Centro will not disappoint. Live Samba musicians perform nightly in squares such as Pedra do Sal, with neighbouring bars offering an excellent vantage point to drink a caipirinha and soak in the music. Later on, party away in the three-floored warehouse of Rio Scenarium in trendy Lapa. With its quirky antique furniture and emphasis on traditional Samba music, a night in Rio Scenarium is a guaranteed unique clubbing experience.

In recent years, Samba has given rise to various sub-genres, such as Sambass, a blending of samba and drum and bass. If this sounds like your thing, head down to Fosfobox, a local favourite in Copacabana, and catch one of their bass nights.

For a glimpse at the jaw-dropping displays from Rio Carnival 2020, check out this video.

During the 1960s, Samba fused with jazz forms to create a new sound: Bossa Nova. Partially as a response to nationalist movements, Bossa Nova grew out of calls to develop a distinctly ‘Brazilian’ sound, divorced from previous European influences. Particularly associated with the regions of Ipanema and Copacabana, the most famous Bossa Nova song internationally is undoubtedly ‘The Girl from Ipanema,’ a song that in many ways put this region on the map. Today, Ipanema is a major tourist destination, with visitors flocking to experience the relaxed beach vibes promised by the sounds of this calming genre.

For those looking to experience this sound live, the place to be is Beco das Garrafas, widely recognised as the birthplace of Bossa Nova and one of the few original bars left from the period. Decked with memorabilia to the movement, from CDs to instruments, it also hosts live performances throughout the week.

Whilst in the neighbourhood, check out the Ipanema Hippie Market, a famous Sunday market in Ipanema set up in 1968, that still continues every week.

Interested in hearing this sound from home? Check out this live Bossa Nova playlist, featuring original calming Bossa Nova tunes to play in the background as you study or work.

Tropicália emerged around the same time as Bossa Nova, yet had a far shorter lifespan, the movement ending abruptly in 1968. Not just limited to music, Tropicália encompassed a diverse range of artistic forms produced at the time. Combining the Afro-Brazilian rhythms of Samba with international rock, and particularly British Psychedelia, the result is a fascinating musical style that continues to leave an enduring legacy today. In many ways, the movement was a political antithesis to the nationalist origins of Bossa Nova, encouraging the mixing of sounds from all over the world and deconstructing notions of authenticity. Today artists continue to use the sounds and samples from this period, with some even operating under the label of ‘Post-Tropicália.’

You'd be hard pushed to find a bar exclusively playing Tropicália in either Rio or Sao Paulo, but Casa da Matriz in Humaitá in Rio has been known to put on regular Tropicália nights. Drawing on the aesthetic and psychedelic vibes of the movement, this hipster club is a favourite amongst students and local creatives.

To hear the defining artists and tracks of the Tropicália movement, check out this compilation album; bursting with psychedelic guitar hooks, political rants, jazzy vocals and percussionist sounds of the Amazon:

Moving into the 1980s, Funk emerged as a major musical style in Brazil. The sound is heavily influenced by the Miami Bass style, due to Rio DJs often stopping in Miami to buy the latest American records. Emerging from Rio’s predominantly Afro-Brazilian slums, known as favelas, the sound is also drawn from traditional African religious music, Candomblé and U.S. hip-hop.

Funk carioca is distinct in that it is largely sample based and utilises a limited pool of samples that typically appear in most songs of the genre. Examples of samples include the horn intro to the ‘Rocky’ theme and DJ Battery Brain’s “808 volt” drumbeat. This makes it a very clear sound to recognise, and these samples continue to be heard in underground clubs and mixtapes today, as well as internationally in songs such as M.I.A’s ‘Bucky Done Gun.’

To hear the sounds of funk carioca today, the best way is to get deep into the favelas, where the sound originated. Despite governmental neglect leading to slum housing and high crime rates, these areas can be perfectly safe for those who know where to go, and there are countless gems for those who do. One such party is Alto Vidigal, a hostel and nightclub, blasting all-things funk and reggaeton in its outdoor bar and dancefloor.

Around this time, rock kicked off hugely worldwide, but particularly in Brazil. International rock bands from the U.S. and UK were consumed religiously and inspired a generation of Brazilian musicians and bands to pickup the guitar and create a new distinctly Brazilian form of the genre. Despite a huge rock scene throughout the 80s and 90s, few Brazilian bands went on to international success, partially due to limited funding for the arts at the time. These bands were highly popular domestically however and enjoyed great popularity and pride in touring throughout the nation. One exception to this is CSS, an electro-rock band that achieved major success worldwide, as well as Sepultura, a heavy metal band that incorporated Amazonian rainforest percussion with heavy guitar riffs. This sound became hugely popular in other growing heavy metal fanbases, Japan being a notable example.

Since the 2000s, indie rock has become a major genre in Brazil, and is showing no sign of slowing down, unlike its European counterparts. Festivals such as Rock in Rio and Lollapalooza Brasil are staples of summer and attract festival goers from across South America.

Today, Red Bull Studios in Sao Paulo offer free studio time to budding musicians, as well as music classes from local legends, allowing talented artists from all walks of life to get into music.

Our final genre is hip-hop, the most popular music form in the world today and one of the past century's most powerful mediums for voicing the struggles of the marginalised and oppressed. As black communities developed the sound in the U.S. throughout the 1980s, Afro-Brazilian communities looked on, finding solidarity in their own similar experiences of structural oppression.This led to huge demand for a distinctive Brazilian hip-hop sound.

Focusing particularly on Sao Paulo, the hip-hop scene exploded, from countercultural favela parties and rallies in the street, to stadium tours. Over a few decades, hip-hop crept into every aspect of Brazilian music and culture, engaging all sections of society. Today, Brazil proudly stands as one of the largest hip-hop giants globally, and countless sub-styles and forms are represented and created every day.

For a hip-hop oriented night out in Sao Paolo, head down to Clash Club or Casa da Luz. In Rio, Febarj is best known as a relaxed and friendly space dedicated to spinning the best hip-hop in the city.

To hear the sounds of Brazilian hip-hop from home, check out this Spotify playlist. Here you can sample the hottest artists emerging from the country today, and the wide diversity of influences that led to these sounds. From Bossa nova, to Samba, and to funk carioca, modern tracks in Brazil draw on centuries of musical movements and styles, emerging with a sound that is proudly, and distinctly, Brazilian. 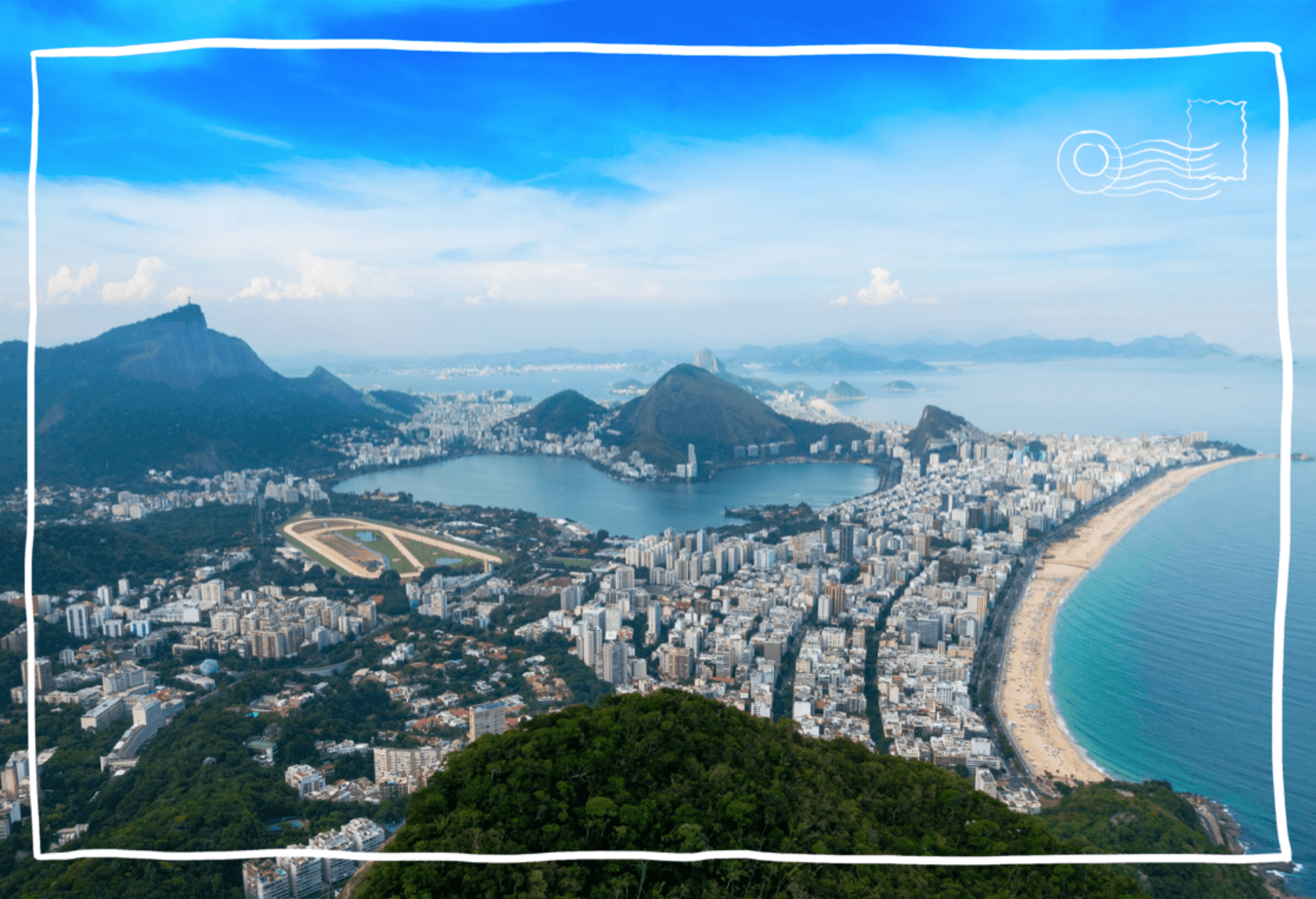